Op-Ed: The Silence is Deafening | CNBnews.net 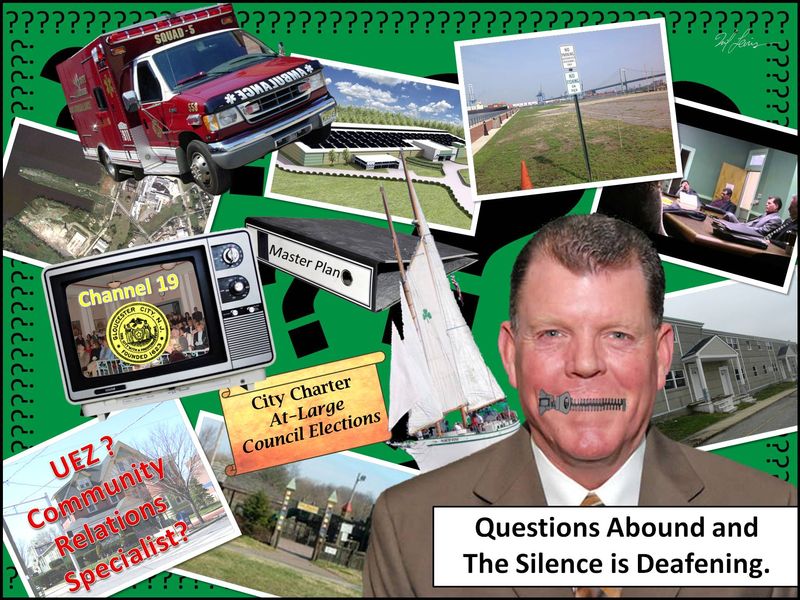 This upcoming Election Day will mark the sixth year of Mayor William James' administration and a mid-point of his second term in office. I remember reading candidate James' pre-election campaign message to the Gloucester City News, back in 2006, in which he said:  "Over the past years, I’ve seen a community that is losing its hometown feel and appearance. I see and hear of deteriorating neighborhoods, I see vacant and closed storefronts, and I see the streets, and street corners and porches abound with individuals who have no respect for the people around them or conscious care about their own behavior."

He also spoke boldly of communication, public access, fiscal responsibility, and tearing down a political machine that was restricting the future prosperity of our community.  "The time has come, ladies and gentlemen, to stand up to 'the machine,' of a select group of people, who have controlled your lives for far too long. The time has come to 'hold the high ground' and stop the decline, to 'fight the good fight,' and to give Gloucester City government back to the people."

However, as the years have gone by, this administration's desire to openly share information with the broader public has decreased substantially since its first year. As far as the political machine goes, the words of one Councilman said it best: "We had to become the machine to beat the machine."

On communication, candidate James said - "It’s time to change the way the City government has communicated with you. The Independent team is a proponent of supporting and informing the City News of all major and current developments within the community. We are a strong proponent for more informative use of Channel 19 and for bringing Council meetings back to Channel 19 so everyone can see what actions City government is taking in your behalf."

As it stands today, the City has developed a website.  The Mayor makes an annual address on the State of the City in the pages of the Gloucester City News and CNBnews.net and just a few weeks before Election Day the administration will make a couple of statements about how hard they are working for our residents. All good things except, where is the communication for the rest of the year?  Only to be found at Council, Caucus or Work Session Meetings?  What if you can't attend?  Is this all the administration had in mind when candidate James spoke of increased communication with the public?

When was the last time a Council Meeting was broadcast on Channel 19 or even the City's website?  Web-video is not difficult technology to operate, so why hasn't the administration taken the initiative to follow through with their support of increased public communication?

So, as an example of this Administration's failure to communicate openly with the people of our community, I instead ask YOU - the reader and resident of Gloucester City -  if you know even some of the answers to the following questions.

- What has the James Administration done to relieve the quality of life concerns in the City - especially the northwest side?

- How has the administration utilized the information gathered from its public survey conducted last year?

- How has this administration assisted the small business community to grow?

- What barriers has the administration removed to promote entrepreneurial investment and commercial development in our community?

- How has this administration promoted Gloucester City's potential to the commercial and residential market outside this community?  What has the UEZ Office and the Community Relations Specialist done, specifically, to attract interest in what Gloucester has to offer?

- What was the City's need/purpose of the schooner "Northwind?"  Has that need been met?  If yes, please explain.

- What exactly is the plan going forward to promote Gloucester City's Waterfront or overall community investment?

- Aside from a rented billboard on the border with Brooklawn,  where else throughout the Delaware Valley has the administration advertised our community's potential?

- Of the over Five Million Dollars of public bond money the City spent on buying and redeveloping Chatham Square/Meadowbrook Mews/Gloucester Terrace, how many reconditioned townhouse units have been sold?  How much has the City recovered for the public tax dollars put out?

- What is the City's plan for Gloucester Terrace?

- What is the City's current plan for Freedom Pier?  Is the City going to shell out many more millions of tax dollars to build a restaurant?

- What law enforcement agency /security group did they consult with for planning the security of Freedom Pier and what has the cost been to repair vandalism of lights on Freedom Pier vs. vandalism to lights in Proprietors Park?

- How much has the City saved since privatizing the ambulance service and has the new service fulfilled set expectations?

- Why did the City layoff eight firemen the year after hiring seven?

- Will the City layoff the three newly hired/rehired firemen if the City cannot obtain new grants in the future?

- What is the plan for the rehabilitation of Fort Nassau Playground?

- What is the plan for the empty parcels of ground the City owns in Southport?

- When will construction begin for the compost facility?

- Why did the City not have full disclosure public hearings about the compost facility's plans to build a processing facility here, as the City Governments of other neighboring communities had done?

- Has the City Government put forth or followed through on a plan to reduce the number of empty lots and City-owned properties in our community - which will reduce our collective tax burden and increase property rateables?

- Has this administration given you any further explanation about the status of the at-large Council elections referendum that passed in 2011 or how that proposed amendment to our City Charter is progressing in the State Legislature?

What of our community's objectives and goals? Aside from the huge public expense we can see at Meadowbrook Mews/Chatham Square/Gloucester Terrace (well over five million in bond debt and still counting), the dirt pile at Southport (another five million in bond debt and counting), and Freedom Pier (two million of public grant money and still counting) what are the Administration's plans for the City's future?

The current Master Plan was developed in 1996. It has been reexamined in 2002 and 2010 yet, a new Master Plan still needs to be developed. What is the delay and where is the focus for our community's efforts in the next year, five years, or ten years from this administration's perspective?

I understand that taking on the responsibility of public office is a thankless job and though I am critical of their silence, I do honor their committment.  I give praise when deserved.  That said, there are certain expectations to be fulfilled while holding public office - one of which is openly communicating the actions being taken on behalf of our community's residents by their Government.  Over the course of this administration's time in office, I have come to see that Mayor and Council do not believe broad explanations are necessary to the public due to, I can only assume, the simple fact of their being elected or that communication begets questions and questions lead to debate which hampers expediency.


Costly actions have been taken that put substantial amounts of public debt on our shoulders, and decisions have been set in motion that have sweeping consequences for our City's current and future operation.  I for one want a City Government that communicates freely, openly, and unsolicited with their constituents to explain the reasons behind their actions.  This current administration has seemingly yet to realize this basic and fundamental precept of good governance.

Op-Ed: The Silence is Deafening | CNBnews.net

This upcoming Election Day will mark the sixth year of Mayor William James' administration and a mid-point of his second term in office. I remember reading candidate James' pre-election campaign message to the Gloucester City News, back in 2006, in which he said:  "Over the past years, I’ve seen a community that is losing its hometown feel and appearance. I see and hear of deteriorating neighborhoods, I see vacant and closed storefronts, and I see the streets, and street corners and porches abound with individuals who have no respect for the people around them or conscious care about their own behavior."