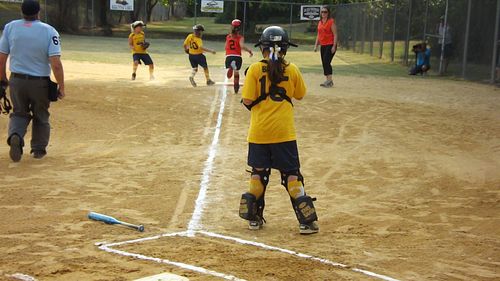 The show, or the games, must go on.

Even though a major EPA clean-up threatened to interrupt the 19th annual Gloucester City Girls Softball Tournament, three towns stepped up and offered their fields so the mid-Summer softball classic could be played.

The 65 teams and 24 towns that had been invited to compete in this year’s tournament fanned out across Maple Shade, Washington Township and Bellmawr.

The 10U’s went to Maple Shade and Gina Capate, president of Maple Shade Girls Softball, was glad to host them.

“When Gloucester asked us if we would take an age bracket, of course, we said yes because of the great rapport we have established with them over the years. It was a fantastic tournament and we were glad to help,” she said.

Capate said the 10U’s played some exciting games and had lots of memorable moments in Maple Shade during the tournament.

“One noteworthy team was Sacred Heart from Burlington County. They were 0-17 this season, but when they came and played here, they had their first win and had a great run in the tournament,” she said.

However, it was the elimination game between the Maple Shade 2 team and Washington Township that caused Capate to declare, “That game was probably the best softball game I have ever seen.”

Both Maple Shade and Washington Township were intense, trying to fight their way out of the loser’s bracket.  Maple Shade was down 4-0 when then they started hitting.

They brought the score up to 9-9. So the game went into “International Tie Breaker” and Maple Shade scored two more runs.

During Washington Tow-nship’s bat, they advanced a runner to third with one out. Their next batter smacked a pop-up to left center, which was caught and led to a double play.

Maple Shade won, but it was a great game and emotions were so high that tears were flowing on both sides, she recalled.

Over in Washington Township, the 8Us and 12Us played. Joelle Rossi, who is president of the Washington Township Parks and Recreation Softball Board, said it was an honor hosting the tournament at Washington Lake Park this year and their girls were thrilled to play on their home fields.

Rossi said, “Washington Township has participated in this tournament for many, many years.

“Our board hopes that we measured up to the fine tradition of a great softball tournament that was organized by many dedicated Gloucester City men and women for almost two decades,” Rossi said.

“We appreciated their visits and guidance throughout the 2012 tournament and enjoyed getting to know the coaches and girls from the many towns that came to play here.”

As for the action, Rossi noted, “We watched some very dedicated players and some incredible games.”

In Bellmawr, both the 10U and the 18Us claimed the championships in their brackets. Ed Legenski, coach of Bellmawr’s 10U team, said that his team kept their undefeated, winning streak alive by beating Maple Shade 9-7 in the championship game.

Yurcaba was also named the tournament MVP for 10U.

Although the tournament was taken out of Gloucester City, Tournament Director Bruce Parry travelled to the three towns to watch as many games as possible.

He said, “We give credit to Bellmawr, Maple Shade and Washington Township for stepping in to run the tournament. We appreciate that they did this because it means a lot to the kids.”

Parry acknowledged that the tournament was different this year.

“Not only were the games not played in Gloucester, our volunteers had nothing to do with it,” he said.

As for his dedicated team of volunteers Parry said, “Everyone is taking their vacations, which they couldn’t do before because they were so involved with running the tournament.”

However, Parry promises, “We’ll all be back in Gloucester in 2014.”

That’s when Parry anticipates the fields will be ready so the tournament can return home.

The 2012 winners of the 19th Annual Gloucester City Tournament were: 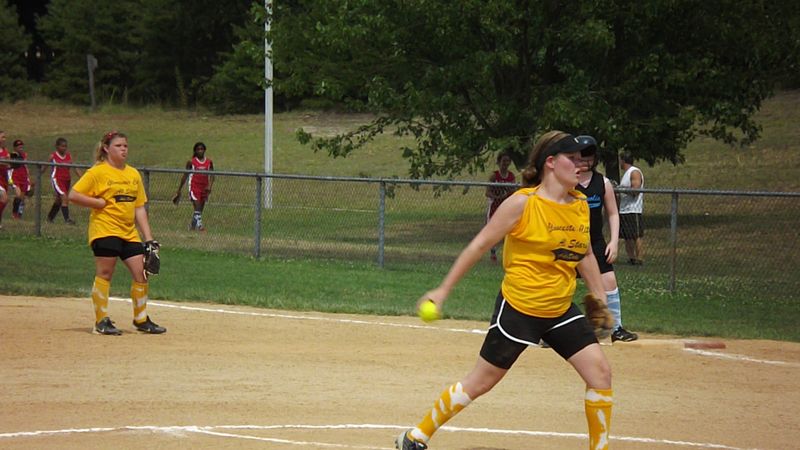 Gloucester's pitcher gets ready to throw the ball as the base runner on first is ready to move in the 12U competition. photo credit Anne Forline

The show, or the games, must go on.

Even though a major EPA clean-up threatened to interrupt the 19th annual Gloucester City Girls Softball Tournament, three towns stepped up and offered their fields so the mid-Summer softball classic could be played.

The 65 teams and 24 towns that had been invited to compete in this year’s tournament fanned out across Maple Shade, Washington Township and Bellmawr.