A Gloucester City woman has written a letter expressing "indignation and sense of outraged feelings at the statue of a nude female in the park at Gloucester City."

She goes on to say the statue should be draped or removed!

"It's bad enough to see females bathing in one piece bathing suits, but that has never compared to the influence of this statue".

Yes, the letter is real, written by Prudence Talbott, and sent to the Camden County Park Commission.

But what I didn't mention... is that the letter was sent in 1930!  The article which 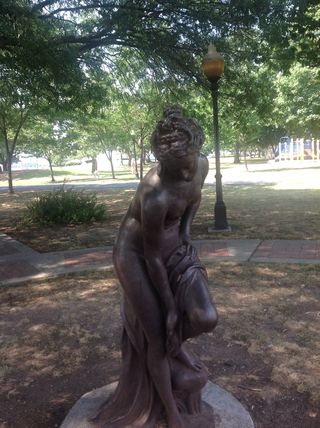 Recently at Cleary's Notebook there have been several posts and interesting comments  about the statue located in Proprietor's Park along the waterfront.  I've noticed the statue myself over the years, and seeing the recent interest, coupled with my enthusiasm for a good research challenge, I fired up my web browser and started to search.

The article I refer to was published in several national publications in August 1930.

I found it in the Daily Messenger of New York, August 6 1930, and it was also published in Life magazine the same week.   Back then, Life was more of a humor magazine and not the American photo journal it became more famous for.

So specific to the origins of the statue, the article describes the statue as "A relic of old times in Gloucester and has been in the park for fifty years".

Remember... this was stated in 1930.  Fifty years puts the statue's placement in the 1880s.   Sadly, even 90 years ago it seems the statue's history and value were already lost.

The article actually opens by connecting the statue to the Billy Thompson racetrack and entertainment "Mecca", that was Gloucester City.

Other interesting aspects of Miss Talbott's letter were her "pureness", to the extent of being reluctant to even discuss the subject with the men of the Camden County Park Commission, who at the time managed the park., as well as the "women bathing in one-piece bathing suits!"

Makes me think those who received her letter found some humor in it, which is how it ended up in national publications.

Regarding the Life magazine version... on the internet I could see some of the text of the article, but the site would not show all of it.   Interestingly, it seems there were additional details in the Life version and I was slightly frustrated that I could not see them all.   A little more searching and I was happy to find an original copy for sale online, which I have ordered and expect it to be delivered within the week.  If anything new is in that version, I willl update this article.  I'll likely donate the magazine issue to the Gloucester City Historical Society, if they have interest.

I wasn't done there.  I continued my search, using a variety of search terms and websites.

As the clock turned past 1am last Thursday night (and having to get up in 4.5 hours later for work), I found that the Smithsonian Institute's "Art Inventories Catalog" has a page for Gloucester City's Iron Lady.   This was done as part of the Smithsonian's "Save Outdoor Sculpture" project, and in 1995 they captured findings on the Iron Lady.

The Smithsonian indicates the sculpture was dedicated around 1890, and relocated in 1929.  Purchased from France by William Thompson and placed on his Gloucester City estate.  When the estate was demolished in the 1920s to make room for the Coast Guard station, the statue was saved...  and later moved to its present location in 1929 when Camden County created the new park.

They refer to the statue as the Iron Lady, but indicate its materials as "Concrete and possibly iron"

The timing of the 1929 move fits right into Miss Talbott's letter of 1930.  One can assume that prior to being placed in the park, the statue was not in a place readily seen by the public.  It took less than a year for Miss Talbot to complain.

While they do indicate the statue has French origins, there is no mention as to how this was determined, or who the sculptor was.

The full text of  "Maiden Lady Wants Statue Clothed to save Morals":

Gloucester City, gay place in years gone by when Billy Thompson’s race track was in the Mecca for sporting enthusiam, smiled today.

The reason was a letter to the Camden County Park commission by a woman who protested against a statue of a nude female figure in the County Park in Gloucester City.  The woman, who signed herself Prudence Talbott, wants the commission either to drape or remove the figure.

If you were a woman,” wrote Miss Talbott, “you would understand my feelings on the subject.”  The letter was addressed to the secretary of the commision.  The secretary happens to be a woman - Mrs Z. M. Castor.

But Mrs. Castor is away on her vacation and so the letter fell into male hands.

Leroy R Goodwin, president of the commission, suggested that if the commission had to get a dress for the statue Miss Talbott had better be consulted as to the style.  The letter was read at a meeting of the board, but no action was taken.

The statue is a relic of old times in Gloucester and has been in the park fifty years.

“As a woman who prides herself on virtue and modesty I wish to register through you to the Camden County Park Commission my indignation and sense of outraged feelings at the statue of a nude female in the park at Gloucester City.  If you were a woman you would understand my feelings on this subject.  It is bad enough to see females bathe there in one piece bathing suits, but that has never compared to the influence of this statue.  I know you will say “To the pure all things are pure”, but I would have you know that I am pure and would not be otherwise.  I think that the “statue” should be either draped or removed, because I think it is a menace to the morals of our community as it is.  I would like to discuss the situation with you personally, but cannot help a feeling of difference to talk over such a subject with a man who cannot possibly understand a maiden’s feelings on such a subject”

A Gloucester City woman has written a letter expressing "indignation and sense of outraged feelings at the statue of a nude female in the park at Gloucester City."

She goes on to say the statue should be draped or removed!

"It's bad enough to see females bathing in one piece bathing suits, but that has never compared to the influence of this statue".

Yes, the letter is real, written by Prudence Talbott, and sent to the Camden County Park Commission.