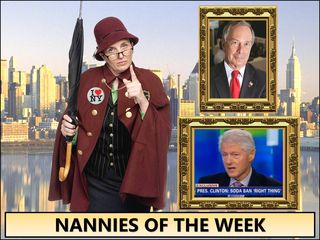 (cnbnews.net)When Government do-gooders abuse our liberty with "Nanny-State" laws - backed by force - to protect us from ourselves, they deny us our right to personal choices.  A recent example of Government do-gooder abuse comes from New York City's Mayor Michael Bloomberg and his ban on large-sized soda drinks.  Chiming in with his support for the Mayor's ban was former President (and reformed fast-food fatty) Bill Clinton during his guest spot on Tonight with Piers Morgan. President Clinton stated that Bloomberg's ban was an important step in stopping childhood obesity and lowering the number of Americans with diabetes.  How about that, it was the Big Gulp's fault all along...damn evil bastards at 7 Eleven!

After listening to Reformed Willie's support explanation, and reading more about Mayor Bloomberg's idiotic soda ban (which he stated was crucial because "It's the Government's job to ALLOW people to live longer"), I followed the illogic...I mean, logical conclusion of their do-gooder argument and started making a list of other items the Central Planning Nannies should ban in the following - fictional - press release.

In an effort to help The Government allow Americans to live longer - since you are all apparently incapable of making these decisions on your own - the following items have been prohibited.

1. Sex Without Intent to Conceive - Sexual intercourse transmits STDs, AIDS, and other various unwanted consequences (like cuddling afterward), so performing a sex act without the expressed and explicit intent of producing children is strictly prohibited.  This goes for people of all ages, genders, and marital statuses (same sex included.)  BTW - Two children only, as there is only so much wealth to redistribute!

2. Smoking - Nothing healthy at all here so let's just stop beating around the bush and get rid of it.  Oh...wait...we'll have to find a new source of tax revenue to fund all of those absurd programs that don't actually go towards educating people about the dangers of smoking.  You know what...don't worry...we can always just print more money with the help of the FED. Yippee!

3. Candy - Candy is basically an unnecessary food that yields only very minor health benefits -  and that's with Dark Chocolate which nobody likes anyway - so it's outta here!  Hit the highway, Hershey's!

4. Cars - We keep restricting the things you can do in a car and what you must have included with the vehicle to maintain a Government approved safety rating.  It's getting to be exhausting just keeping up with all the hoops we make automakers  jump through.  And even with all of our annoying nannying, people are still killed in and by automobiles.  So, let's just cut it off and get rid of all automobiles.  Everyone can go ride the bus!  P.S. - Detroit, don't worry, we'll keep subsidizing automakers by having you build fleets of electric, solar-powered, wind-mill-driven, climate-change-friendly, buses and we'll pay for it by just printing even more money.  Yeah!

5. Salt - We're cool with it if you just put it on your drive way for icy winter days, or in your water tank as a softener, but don't even think about putting it on your food, Mister!  Heart disease has been rumored to be caused by salt, even though it has not been conclusively proven, but  what do we care.  Better to be safe than free...I mean, sorry.  Shake it off, Morton's.

6. Cooking Oil - Cooking oil turns to grease, grease makes you fat, and fat people suck-up more resources than we can hand out from the Central Planning Bureau of Nationalized Healthcare.  Who cares if you like the taste and enjoy eating it from time to time - fatty - it's down the drain for this artery clogging goop.  P.S. - Don't worry McDonalds, Popeye's and the South as a whole...we'll also just subsidize your lost revenues by - you guessed it - printing more money.  Wahoo!

7. Sugar - If there is sugar in it, it must be bad!  High sugar levels lead to diabetes and we at Central Planning are trying to help the children, always the children (and their stupid parents), by  taking control of this epidemic.  So, forthwith, sugar is only to be given to your old- fat-momma when she is looking for a peck on the cheek.

8. Television - T.V. entices fatties to sit around the couch and watch mindless dribble, like Fox News, while snacking away on sugary or salty foods.  Well, we're pulling the plug on the ole boob-tube.  All news and commands from Central Planning will henceforth be relegated to approved radio programs on NPR (which we'll start funding again.)

9. The Internet - We tried regulating it with SOPA, PIPA and CISPA, but alas it's not enough. So, we are just shutting down the internet.  The free exchange of ideas is dangerous. It leads to uncensored content and inappropriate stimulation - not to mention free thinking.  As always, our efforts are to protect the children and children could haphazardly go onto a mindless website, wasting time and brain cells viewing material unfit for developing human minds...like facebook.

10. Cell Phones - Reckless people text while walking.  Though it is hilarious when they fall into mall fountains, young people could walk in front of one of the millions of electric, solar-powered, wind-mill-driven, climate-change-friendly, buses we are subsidizing Detroit to build.  Hereafter, phones must be hardwired only and located at predetermined, bureaucratically scrutinized, inconvenient locations - like poorly lite street corners, your creepy neighbor's house, and public restrooms.

My reason for being sarcastic is to help emphasize an important point.  When Government Nannies overstep their bounds by creating laws, such as the one above, remember exactly what it is they are saying about YOU through their legislation.  YOU (not just your friends, neighbors, or people you don't know) YOU are too stupid, weak, helpless, careless, dangerous, or generally unable to handle these decisions on your own.  The Nannies believe only they can right the wrongs of society because YOU are just too dumb and need them to make these choices.

Each of these rights-violating laws may seem insignificant or benign when their intent is viewed individually but, taken as a whole over time, this is how liberty is stolen away from a free people...one small piece after another until it's all gone.

(cnbnews.net)When Government do-gooders abuse our liberty with "Nanny-State" laws - backed by force - to protect us from ourselves, they deny us our right to personal choices.  A recent example of Government do-gooder abuse comes from New York City's Mayor Michael Bloomberg and his ban on large-sized soda drinks.  Chiming in with his support for the Mayor's ban was former President (and reformed fast-food fatty) Bill Clinton during his guest spot on Tonight with Piers Morgan. President Clinton stated that Bloomberg's ban was an important step in stopping childhood obesity and lowering the number of Americans with diabetes.  How about that, it was the Big Gulp's fault all along...damn evil bastards at 7 Eleven!