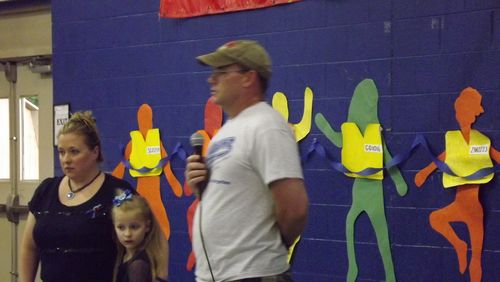 BELLMAWR NJ-Water Safety - Tom Calhoun stands with his wife, Tara, and daughter, Melani, while speaking to the Bellmawr community about the importance of water safety.

“It was a Saturday, the day before my birthday, and we were going to a friend’s house for a Fourth of July barbeque,” he remarked to a standing room only crowd during Bellmawr Park’s recent water and bike safety event.

Calhoun, a long time Bellmawr resident and former Chief of the Bellmawr Park Volunteer Fire Company, said, “My kids, Bradley and Melani, wanted me to open my present early.

“It was a Nintendo DSi fishing game, that my son especially wanted me to open so he could play it,” Tom remembered with a laugh.

“Fishing was important to us because that was something we did together,” he added.

“Later on that day, while we were at the barbeque, Bradley was swimming in our friend’s pool. It was a newly installed permanent, four foot above-ground pool. I was less than 25 feet away when Melani was standing on the pool’s ladder and yelled to me that Bradley was underwater.”

Pointing at Melani he acknowledged, “She’s the real hero. She’s the one who saw Bradley first.”

“It took me two seconds to get to him and start CPR, but it was too late,” he said.

Calhoun shared his family’s emotional story with the Bellmawr community so he could educate the public about the dangers of drowning and the importance of water safety.

The students at Bellmawr Park School had prepared for the water safety event by reading the book, “Josh the Baby Otter,” which was created in memory of Joshua Collingsworth.

Josh, of Nebraska, died when he was 2 ½years old in a drowning accident. His parents created the Joshua Collingsworth Memorial Foundation to raise water safety awareness.

Each day, approximately 10 people die from unintentional drowning. Children ages 1-4 the highest drowning rates. For children between the ages of four and 14, drowning is a leading cause of death.

Bradley was 5½ years old and had just graduated from kindergarten at Bellmawr Park.

“Drowning is a silent killer,” Calhoun stated. “It only takes about 18-20 seconds for someone to drown.”

Drowning prevention strategies are crucial so that accidents can be avoided.

Always have an adult present when children are swimming.

Never leave children unattended when they are near pools, bathtubs, spas, buckets of water or standing water.  Children can drown in less than two inches of water, Calhoun noted.

Do not allow children to run around pools.

Do not allow children to operate boats or jet skis.

Do not stand up in boats and wear a Coast Guard-approved personal safety device.

Do not drink alcohol while children are swimming.

Make sure there is a lifeguard before swimming in the ocean.

Monitor the color of beach flags. Red means do not go in the ocean. Yellow means caution and green means it is safe to go in.

Swim with the current if caught in an ocean’s riptide.

Ignore your cell phone while children are in or near the water.

Be cautious when children wear “Swimmies.” Good-shall noted that they can slip down or off a child’s arm when sunscreen is applied.

Learn CPR. Calhoun stated, “I was grateful that I knew CPR and was able to attempt it on my son.”

As he concluded his presentation, Calhoun remarked, “I made a promise to Bradley that I will do whatever it takes to prevent anyone else from drowning.”

Below, students enjoy a visit from "Josh the Otter" during Bellmawr Park's recent bike and water safety event. They learned how to be safe while biking and swimming and also enjoyed water-ice, giveaways and a bike obstacle course. Having fun with "Josh" are from left: Cara Forline, Nicolette Leighton, Matthew Leighton, Natalie Klus, Ryleigh Russell and Madison Baldwin. 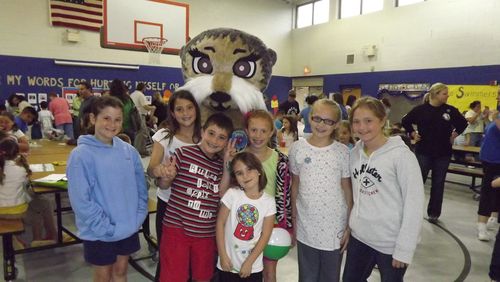 BELLMAWR NJ-Water Safety - Tom Calhoun stands with his wife, Tara, and daughter, Melani, while speaking to the Bellmawr community about the importance of water safety.

“It was a Saturday, the day before my birthday, and we were going to a friend’s house for a Fourth of July barbeque,” he remarked to a standing room only crowd during Bellmawr Park’s recent water and bike safety event.