press release
(Avalon, NJ)—The Borough of Avalon is getting ready for the biggest July 4th celebration in South Jersey. Avalon will host five full days of big events throughout the community, including a free world-class symphony concert and the largest fireworks display along the New Jersey coastline. 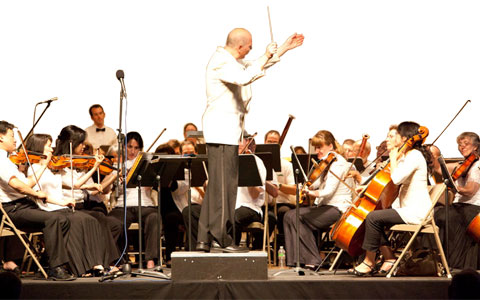 A major highlight of the July 4th week in Avalon will be a free patriotic concert presented by the Bay-Atlantic Symphony on Wednesday, July 4th, at 7:00pm. The concert will be held inside the Avalon Community Hall at 30th Street and the beach. No tickets are needed for this concert and seating will be done on a first come, first served basis.
This year’s Bay-Atlantic Symphony concert is entitled “Quest and Delights of Freedom” and includes selections from Verdi, Anderson, Sousa, and Tchaikovsky. Dr. Herman J. Saatkamp, Jr., the President of the Richard Stockton College of New Jersey, will serve as guest conductor.

Immediately following the Bay-Atlantic Symphony concert the Borough of Avalon will present the largest fireworks display along the New Jersey coastline at the 30th Street beach. The fireworks begin at approximately 9:15pm and will be set to patriotic music. A simulcast of the music accompanying the Avalon fireworks will be broadcast live on WCZT 98.7..the Coast radio station. Before the fireworks event, the Avalon Department of Recreation will have various fun kids activities on the Avalon beach, and next to Avalon Community Hall.

Earlier in the day on July 4th, Avalon will be holding its famous boat parade at high tide, starting at the Avalon Pointe Marina. More information is available from the Avalon Department of Recreation by calling (609) 967-3066. Avalon will get the July 4th celebration started at 12 Noon with a free beach concert at the 30th Street beach featuring music from the “Tropical Steel Band”.

The July 4th celebration begins in Avalon on Sunday, July 1st with a string band parade throughout Avalon. The parade steps off at the Avalon Community Hall at 6:00pm and proceeds north on Avalon Avenue to 29th Street, then turns west towards dune Drive. The parade continues on Dune Drive until it reaches Veterans Plaza at 21st Street for Mummers’ music and dancing.

On Monday, July 2nd the Avalon Department of Recreation will sponsor a patriotic kids’ event at Veterans Plaza at 6:30pm. The following day, July 3rd, field races will be held at the 10th Street recreation field, at 10:00am.

The celebration of America’s birthday will continue on Thursday, July 5th in Avalon. The Borough will host a performance by the 63rd Army Band at Veterans Plaza, 21st Street and Dune Drive, at 7:00pm. The concert is free and open to the public. Bring a beach chair and enjoy live music from one of our military’s finest bands.

press release
(Avalon, NJ)—The Borough of Avalon is getting ready for the biggest July 4th celebration in South Jersey. Avalon will host five full days of big events throughout the community, including a free world-class symphony concert and the largest fireworks display along the New Jersey coastline.