Adamek to Fight on NBC Sports from New Jersey By Raymond Rolak | cnbnews.net 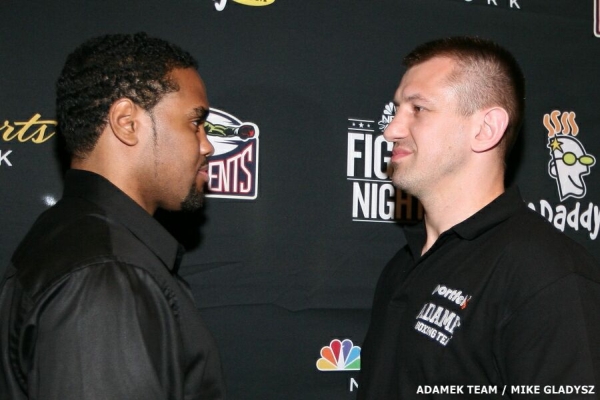 (cnbnews.net) NEWARK--  Recently I got a chance to speak with Polish born Tomasz Adamek regarding his upcoming fight with Eddie Chambers on June 16, here at the Prudential Center.  Adamek is 45-2 with 28 KO’s.

Sitting down with Adamek to talk about this heavyweight match he said, “Day after day, I train for the fight with Eddie Chambers.  Eddie is shorter than me and he weighs less.  He treats boxing and our fight very seriously.   My people tell me there has been a lot of interest about our fight in U.S.A.  This event is going to rock the Prudential Center.”

Both fighters are listed at 6’ 1”.  The arena is expected to have a pro Adamek crowd with lots of Polish red apparel.

Adamek was also cheering on his adopted hockey team, the New Jersey Devils which are currently involved in the Stanley Cup Playoffs.  “Roger Bloodworth and I are huge Devil supporters,” added Adamek.

Chambers, a Philadelphia native son is 36-2 with 18 KO’s.  On March 20, 2010 he faced Wladimir Klitschko for his first ever title shot in Düsseldorf, Germany.   Klitschko defeated Chambers by knockout in the final round.  The Ukrainian was criticized between rounds by his trainer Emanuel Steward for not fighting aggressively enough.  Klitschko began punching more often during the final round and eventually his left hook hit Chambers to the forehead.  The punch made Chambers fall forwards and lose consciousness for a short amount of time.  The referee stepped in and called an end to the contest instantly.

Chambers said, “This fight will be interesting and fast.  I promise a very interesting fight and that I am going to take advantage of this opportunity.”

This fight will be 12 rounds instead of the customary 10.  Kathy Duva of Main Events said this bout is the fourth edition of “Fight Night” on NBC Sports.

“Once I beat Adamek, I’m right back in the middle of it all,” Chambers said.  Referring to the heavyweight rankings, he added, “All respect to Tomasz.  He’s exciting and has a lot of heart, but I'll be ready for anything.”

“They say Eddie Chambers has fast hands and likes to throw punches.  I am also fast and I like to throw punches,” Adamek said.  “I think on June 16th we will have a very exciting fight.”

For boxing viewers the fight will be televised by NBC Sports but it is also an easy flight into Newark and a short cab ride to the Prudential Center.  Main Events and Ziggy Promotions are putting on the match.    http://www.prucenter.com/default.asp?id=87&objId=1122

Adamek to Fight on NBC Sports from New Jersey By Raymond Rolak | cnbnews.net

(cnbnews.net) NEWARK--  Recently I got a chance to speak with Polish born Tomasz Adamek regarding his upcoming fight with Eddie Chambers on June 16, here at the Prudential Center.  Adamek is 45-2 with 28 KO’s.