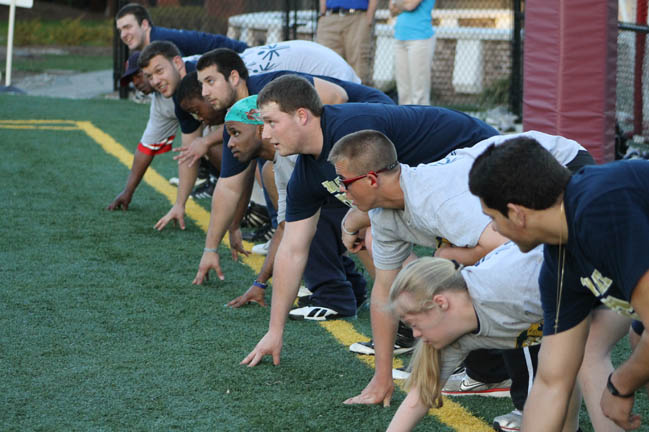 Players teach and learn while enjoying a memorable experience

Stilts and Rodenbeck’s connection during a flag football clinic was met with hoots and hollers from The College of New Jersey’s varsity football team, who helped hold the event at TD Sports Field in Lawrenceville.

“It was great, just great to be out here and helping these kids out,” said sophomore linebacker Joseph Conklin. “Some of them are even better than us at doing certain things. It was a great time and I’m glad that we did it.”

It was a great day for football as the SONJ athletes came out in their favorite teams’ colors – there was a Jonathan Vilma, a Stewart Bradley and even an Ohio State jersey – to meet up with the TCNJ players to work on drills and work on the fundamentals of the game.

“It’s fun because it’s fundamentals, F-U-N are the first letters of fundamentals,” head coach Eric Hamilton said. “You see kids doing it for the pure enjoyment of the sport and it didn’t matter what the drill was or what the position was, they were just out here playing and having fun.”

The first half of the drill session concentrated on the defensive side of the game. Hamilton set up three stations for defensive backs, linebackers and defensive linemen.

The SONJ athletes couldn’t help but let out a laugh here and there as Hamilton’s assistants showed them how to shuffle from side to side, how to snatch the flags off another player, how to pass rush and how to back pedal – a drill that Hamilton himself took part in at one time.

“It’s a different side of the coaches that we get to see out there and it’s awesome,” said junior tight end Tyler Powell. “They’re so enthusiastic and it’s so much fun.”

After the defense had its turn, it was time for the SONJ athletes to take part in the offensive drills. There were drills for quarterbacks, running backs, wide receivers and offensive linemen.

Powell helped guide some of the athletes through some blocking techniques, drills that he’s been doing for years and is happy to pass along.

“It’s fun to see them experience the same things that I’ve been experiencing forever and have a great time doing it,” Powell said.

Seeing players like Powell assisting the SONJ athletes through drills is a situation Hamilton is glad his players get exposed to and something that he loves to watch.

“It gives our kids a chance to realize, maybe, how lucky they have it and they get to give back and try to teach them some of the fundamentals,” Hamilton said. “Seeing that innocence, from the kids from Special Olympics, with the hardness of the (TCNJ) kids, who take for granted, perhaps, the skills that they have, and watch it come together is a unique experience.”

Once the drills were through, it was time for the SONJ athletes to take what they learned and put it to work on the field. Dalton’s pass to Rodenbeck was just one of the countless moments when the SONJ athletes and the TCNJ athletes cracked smiles and let out a roar.

The day concluded with a stretch and a breakdown, which included beats on the chest after a 3-count. As the TCNJ players walked off the field, they shook hands and said farewell to the SONJ athletes, encouraging and congratulating them on a solid night of work.

“It’s a lot of fun to come out here,” Powell said. “The kids are great and they had a good time and that’s all that matters.”

Players teach and learn while enjoying a memorable experience