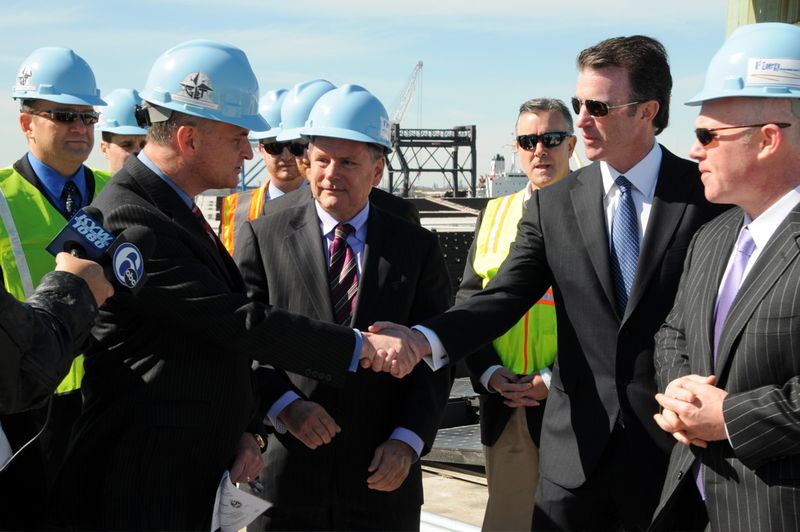 Known as Riverside Renewable Energy, LLC, the $42 million project consists of 27,526 photovoltaic rooftop solar panels covering 1.1 million square foot of rooftop at the Gloucester Marine Terminal, which is owned by the Holt family. It has the capacity to produce 9.0 MW of electricity – enough to power more than 1,500 homes. 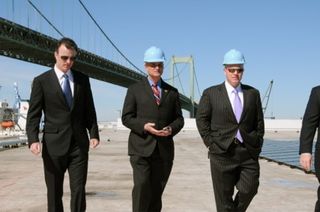 “The Riverside project is an outstanding example of how we can create jobs that move us towards cleaner, more efficient and cost-saving energy that doesn’t come from overseas,” said Congressman Andrews.  “By partnering with the federal government, private industry is able to make strides that are good for job creation and the economy right now, and also for a cleaner, healthier and more energy efficient future here in South Jersey and the country.”

“A lot of things had to happen to make this project come together, and we enjoyed great teamwork from conceptualization through installation and onto completion,” said Leo Holt, President of Gloucester Terminals, LLC. “This project positions Gloucester Terminals for future success in an incredibly competitive field and helps ensure plenty of activity for the Delaware River port community.”

The Riverside project sits atop the roof of the Terminal’s refrigerated warehouse near the Walt Whitman Bridge on the Delaware River. Operating on a “24/7” basis to service food importers, the Terminal is the largest on-dock refrigerated warehouse on the East Coast and a very large user of electricity. Construction on the solar project began in June 2011 and was completed on budget and ahead of schedule last fall.

Riverside will generate the equivalent of up to 80 percent of the Terminal’s power demand. The system is expected to offset more than 8,100 tons of carbon dioxide, approximately the same amount that would be offset by planting 400,000 trees or removing 1,200 cars from the road.

After a rooftop tour of the facility, Andrews presented Terminal officials with the Award Letter for the tax credit rebate under the Section 1603 program from the U.S. Department of the Treasury, which was enacted in 2009 with the Congressman’s support to foster pioneering investments in clean energy technology.

The Riverside project is supported by both federal and state incentives for businesses to invest in renewable energy -- on the federal level via the Section 48 Investment Tax Credit, and on the state level through the N.J. Solar Renewable Energy Credit (SREC) for ongoing solar generation from the project. Riverside will sell the SRECs associated with the system to enhance the economic viability of the project.

Riverside serves as a pioneering project due to the many obstacles it had to overcome, including technical, legal, environmental, financing and construction issues, such as its high-wind location along the Delaware River, the oversight of the Terminal by the Department of Homeland Security, and the fact that the Terminal is a federal Environmental Protection Agency Superfund site.

In addition to the Holt family, the Riverside project is a partnership involving SunPower, a global solar technology company that designs, manufactures and delivers the highest efficiency, highest reliability solar panels and systems available today; Rabobank, a leading global bank and financier of renewable energy projects, which led the financing for the venture; and PSE&G, which plays a lead role in the interconnection of the project to the PJM power grid.  A total of 200 construction jobs were created to build the project. 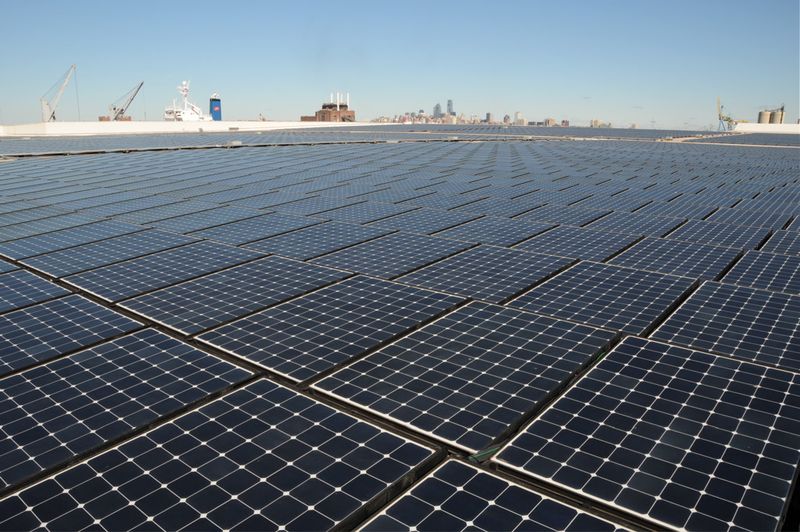 The 1.1 million-square-foot Riverside Renewable Energy solar project is the largest rooftop solar installation in North America. It  includes 27,526 photovoltaic rooftop solar panels that generate nine megawatts of electricity, enough to meet up to 80 percent of the energy needs for the Gloucester Marine Terminal. photo by Andrew Gotlieib

Known as Riverside Renewable Energy, LLC, the $42 million project consists of 27,526 photovoltaic rooftop solar panels covering 1.1 million square foot of rooftop at the Gloucester Marine Terminal, which is owned by the Holt family. It has the capacity to produce 9.0 MW of electricity – enough to power more than 1,500 homes.