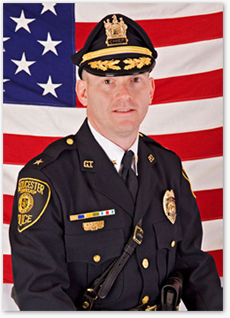 seven- year- veteran of the Gloucester Township Police Officer has been arrested while on duty for allegedly purchasing illegal drugs.

As you know, with narcotics investigations, and more importantly internal affairs investigations, there are some restrictions on the type of information that can be released.  However, I do feel it is important to release as much information as possible so that members of the community can be properly informed.  Providing such information to our community members is critical in fostering continued mutual respect, trust and transparency as these are just a few of the community policing principles in which the Gloucester Township Police Department lives by.

Mr. Eden has been charged with Possession of a Controlled Dangerous Substance 2C:35-10a(1) (3rd Degree), Possession of an Imitation controlled dangerous substance 2C:35-11a(1) (3rd Degree), Possession of a Weapon During a Controlled Dangerous Substance Offense 2c:39-4.1 (Second Degree), and Possession With Intent to Distribute a Controlled Dangerous Substance 2C:35-5b(5) (3rd degree). Mr. Eden was processed for his arrest at Gloucester Township Police Headquarters and released on his own recognizance. Additionally,    Mr. Eden has been suspended from the Gloucester Township Police Department without pay with intent to dismiss.  Please understand that this is an active investigation and the Professional Standards Bureau will continue with their investigation until I am satisfied that Mr. Eden will be held accountable for any and all unlawful or prohibited acts he allegedly has committed.

I am angered -- that Mr. Eden allegedly abused his position of trust by violating the very laws he swore to uphold and defend as a Gloucester Township Police Officer.  These actions are clearly not consistent with the ethical and moral standards of the Gloucester Township Police Department and will never be tolerated.  I am thankful to the officers that investigated these unlawful acts committed by Mr. Eden, and have brought him to answer for his alleged crimes, while showing the community that we will not stand for anything less than dedication to professionalism and commitment to excellence.

These reprehensible acts allegedly committed by this one person are in no way indicative of the 178 sworn and civilian employees of the Gloucester Township Police Department who serve and protect this great community.   In fact, I cannot be any more proud of our police agency.  The initial tip received regarding  Mr. Eden’s alleged illegal conduct was provided to an officer whom this civilian had never met before, which clearly demonstrates that our residents have faith in the members of our department.  This faith and confidence is the result of all the members of the Gloucester Township Police Department.

Additionally, I am proud that the Camden County Prosecutor’s Office permitted our agency to conduct this investigation solely on our own and utilizing our own resources.  This again represents the positive professional image portrayed everyday by our officer’s, and evidence that we consistently and faithfully fully investigate any internal affairs complaint to its logical conclusion.

I urge parents and guardians to let this incident serve as a reminder, or even an education to many of the dangers of substance abuse, and that such temptations can strike anyone.  Parents please take time to educate your children about the dangers of prescription abuse.  Resources and links for drug abuse prevention are listed in your media packet.

If anyone has further information regarding possible improper or illegal contact involving Mr. Eden I encourage them to contact us by calling the Professional Standards Bureau at 856-374-5707, or our anonymous tip line at 856-842-5560.

In closing, it is important to know that I have the highest respect for all of the men and women who choose to proudly wear the Gloucester Township Police badge as a symbol of their public faith in upholding the law.  However,  I believe it is clear that disrespect for the Gloucester Township Police badge by an officer will simply never be tolerated and suffer the most severe legal ramifications possible.

You may view the entire news conference by clicking on the link below:

seven- year- veteran of the Gloucester Township Police Officer has been arrested while on duty for allegedly purchasing illegal drugs.