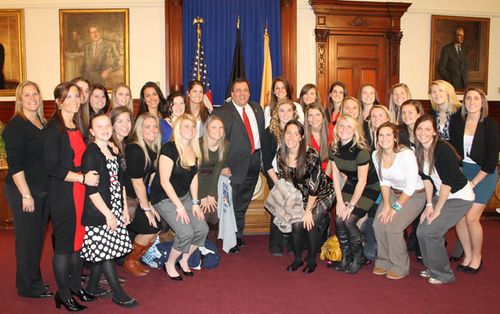 The Lions, who won the 2011 NCAA Division III national championship this past November, were invited to the State House on Friday afternoon for an opportunity to meet the Governor Christie and allow him to offer his congratulations.

“I just want congratulate you on the incredible achievement of winning a national championship,” Christie said to all 26 members of the squad, in addition to head coach Sharon Pfluger and assistant coach Robin Selbst. “What a great accomplishment for your institution and for the state of New Jersey.”

When Christie asked coach Pfluger how many seniors were on the championship team, the 2011 Division III Field Hockey Coach of the Year responded that five players would be graduating.

Christie then quipped, “Well then I’ll tell you what, if you win it next year, I’m coming to you.”

He also mentioned that his wife, Mary Pat, was envious of her husband meeting the team since she was a field hockey standout during her days at Villa Maria Academy.

TCNJ defeated Middlebury College 3-1 in the national championship game on Sunday, November 20. It was the 11th national title in program history and first since 1999.

According to Pfluger, it was the first time a Lions team was invited to the State House since 1981. That year marked the first national championship in Lions’ field hockey program history. Pfluger was not the coach, but rather a player on the ‘81 squad.