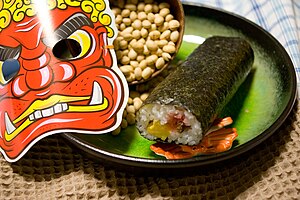 Setsubun literally means the " division of the seasons" and refers to the first day of spring according to the lunar calendar. Setsubun falls on February 3 or 4.On the evening of this day,people throw roasted beans or peanuts inside or outside the their homes shouting "Oniwa-soto, Fukuwa-uchi,"which means"out with the demons,in with good fortune ."

Of course,the aim of this ritual is to keep the house safe from harm while inviting goos luck to come inside.The ritual has become a production of sorts at large temples,where a demon dressed in costume appears on stage and famous people are invited to scatter the beans or peanuts.These roasted beans or peanuts are said to be imbued with spiritual power,so on this day people " eat their age" in beans or peanuts,eating the same number of beans or peanuts as they are years of age (or their age plus one). In some regions, demons are considered a kind of protective deity rather than bad spirits, so people say" Demons within, good fortune within."

Other customs associated with setsubun include the use of springs of holly that are specially prepared to decorate the household gate. The holly leaves have sharp points on which one pierce the heads of sardines. This custom, which became widespread from the Edo period on,is based on the belief that the smell of raw fish and the thorns on the holy leaves will keep demons away.

Actually, the term setsubun is not used for this one day alone.The term is a general one that refers to the day preceding the traditional starting dates for each of the four seasons. The lunar calendar,used more widely in the past,goes beyond the four seasons and divides the year into smaller segments.There are six divisions between the starting dates of consecutive seasons,making a total of 24 shorter seasonal segments through the course of the year.In Additional to the summer and winter solstices (respectively, the longest day and night of the year) and the spring and autumnal equinoxes (when the seasons is noted in dates like daikan (coldest part of winter)and taisho (hottest part of summer).

To return to the bean-scattering on the spring setsubun,it has recently become popular throughout the country to eat sho maki (lit."lucky direction sushi rolls").

This ritual involves someone buying or making a fat roll of sushi on setsubun,facing an auspicious direction (which changes according to the year) and silently gulping down the whole roll.This "urban legend "originated among sushi shop and seaweed producers in the years before the war,but in 1989 a chain of convenience stores in Hiroshima started to sell this idea in earnest called the ("New York Roll") before it migrated to the U.S.A.

With the help of reports in the mass media,the ritual took off like a house on fire,So,don't be surprised if someday you come across someone on a street back there with a long,fat roll of sushi in complete silence eating away.

Editors Note: Hank is a former resident of Gloucester City NJ. He has been writing the  When East Meets West column for CNBNews for over five years.

Setsubun literally means the " division of the seasons" and refers to the first day of spring according to the lunar calendar. Setsubun falls on February 3 or 4.On the evening of this day,people throw roasted beans or peanuts inside or outside the their homes shouting "Oniwa-soto, Fukuwa-uchi,"which means"out with the demons,in with good fortune ."