GLOUCESTER CITY NJ-A recent article written by Bomber Bennett titled “Down the Store” brought back so many memories about my parent's store on Morris Street. Bomber didn't mention our store in the text of his story, but it is shown on the map that was published with the article as #5.

Gert’s has quite a history. The store was located next to our house at 215 Morris Street which is on the northeast corner of Morris and Willow Streets. The store was opened in the summer of 1948. I do not recall much about the opening since I was only 3 years old; however, my Mother, my Sister MaryAnn, and my Aunt Ruth Greene (my mother’s sister) do remember the early days.

The store was a prefab from Sears that came in sections and was shipped from Camden to Gloucester City by railroad. My uncles Herb Greene and Mike Torpey, and our neighbor Slim Trainer, who did the construction, had to go to the RR station and pick up the sections in wagons. The wagons they used were not the station wagons of today, but rather the good old fashion red American Radio Wagons. These wagons served many purposes during the construction and running of Gert’s.  Often my sister and I would be responsible for picking up varied supplies and inventory in our little red wagons.  We would travel 20 blocks round trip in order to fill my mother’s store with supplies. As we traveled to Pap’s, located on the corner of King and Powell streets, we were greeted with “hellos” and “how are your doings”, and no one ever attempted to impede our journey- no one ever interfered with the work of Gert’s store.  Those were the good ol’ days.

The construction of the store took several days. During this time my mother and grandmother brought refreshments for the builders and watched the children.  My sister and I often found ourselves entertaining each other because the adults were busy preparing for the opening of the store. We did not have the video games of today, nor did we watch hours of television. We used our imagination and pretended.  This activity got us into trouble enough times- one time in particular. During one of the times the adults were busy outside, I remember my grandmother had some very good tasting “cough medicine” in the closet. I thought I would take a few gulps to help me with my pretend cough. When my mother returned to the house, she noticed I had wobbly legs. In a panic, she called to my father and grandmother, convinced I was stricken with polio, and began to examine me. She smelled the scent of cough syrup on my breath and realized her youngest son had drunk an entire bottle of cough syrup. I found out a few years later MANISCHEWITZ 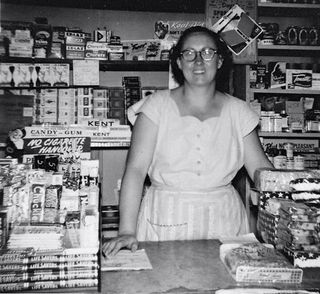 does not spell cough medicine.

Gert’s was known as a candy store. Besides candy (we had 5cent candy and a big glass front Penny candy case. “I’ll take one of these, two of those, etc.)  Gert’s sold soda, Bond and Tip Top bread, Tastykakes, comic books, cigarettes, etc. and even had a pinball machine. Photo, my mom, Gert with some of the store items we sold.

We sold Breyers ice cream where Gert’s was known for her generous cones. A single dip was like getting a double dip elsewhere.  In addition, we were very high tech for the time. Our cash register was a cup cake pan for coins and a cigar box for bills. Yes, Gert did keep a little 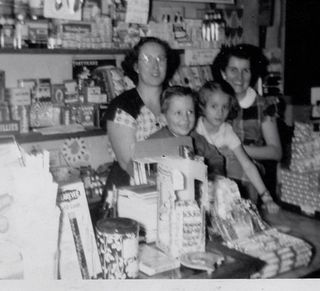 black credit book for neighbors and the workers at the cardboard box factory at King and Morris Streets.

PHOTO on the left is Gert, me, my sister Mary Ann and Aunt Ann McCormick.

When I was about 5 years old we had a special visitor at Gert’s. One morning down the street came the world famous Wienermobile to pay us a visit.   It was really scary to see “Little Oscar” this little person dressed in a chef suit hanging out the top of a hotdog. I remember running into the house and not coming out until “Little Oscar” was gone. I was told he thought we sold meats and would sell Oscar Meyer products. When he found out we didn’t, he stayed and enjoyed a soda with some the patrons of Gert’s.

We used to hang out around the store as the picture below shows. PHOTO (l to r) 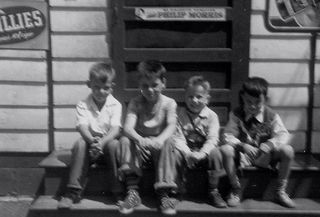 are: Raymond Ovan, Charlie McCormick (no relation), me and John Callahan.

As we got older, my sister and I would mind the store. My father worked at RCA and was not there during the day. Mom would close the store a few hours to cook dinner and at times during the day to do wash. Most Sunday afternoons the store would close so mom and dad could get a break and take a ride. Also, some summer evenings after the store closed they would go for a ride.

Most importantly, Gert’s sold baseball cards. I collected several shoe boxes full which unfortunately were thrown away when mom and dad moved out of town.  Sadly, we did not realize their future value then. The memory of those cards still rekindles a love for Gert’s in me. Oh how we used to toss the cards against the wall for hours trying to get our opponents cards brings back such fond memories.

Along with the great memories of Gert’s come the not so great ones- Triple Cola. This not so tasty soda became an obsession with many of us youngsters.  Because the soda caps were valuable for trade ins on sports equipment, Gert’s carried it.  However, the taste left a lot to be desired. Our goal was to convince as many people to buy the soda, and give us the cap.  It became a competition. Every Spring I would send in the caps to get a brand new ball and bat. Playing baseball was a tradition in our neighborhood as much as Gert’s. We would play ball almost every day in the summer at Edward’s Field located between the railroad and the entrance to Collings  Road. Luckily for us, Gert’s helped support this pastime by selling the Triple Cola. We had to get a new ball and bat every spring. At the end of summer the baseball was as big as a softball due to all of the tape we used to keep the ball together. Also, the bat hurt your hands because of all the nails and screws needed to keep it together.

Sadly, Gert’s closed in the summer of 1964. George Bockius and I took a trip to California that summer. On our return to my house we found no one home, but I knew where the key to the store was kept. We went to the store to get a cold soda and ice cream. We unlocked the door and found the store empty. Did you ever get 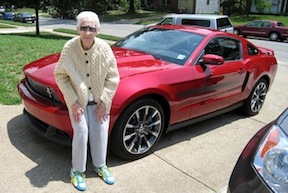 the feeling that your family might move away and not tell you? I got that feeling. They just closed the store and lived in Gloucester for another decade. Some said Gert wanted to pursue a career as a race car driver.

It was great growing up in Gloucester City in the 50’s so many stores to go to. Here are a few we remember.

*The Quaker Store we called McCellan’s at Broadway and Morris had a bike with huge basket to deliver groceries.

*Pine House Hoagie Shop across from the Quaker Store had the best hoagies. The store got its name because of the knotty pine paneling.

*Battersby’s Candy Store at the corner of Burlington and Mercer. They could not compete with our ice cream cones.

*Cramer’s Fish Store at the corner of Burlington and Middlesex. I had to stop there many Fridays to pick up a half pound of flounder.

* Of course we had the Acame “The American Store” and A&P.

Does anyone remember these?

But my most favorite store was the Shoe Store on King Street. Every time we went to the Saturday matinee at the King Movies we would stop in and put our feet in the X-ray machine. No wonder my feet look so weird.

Finally, did you ever ride your bike behind the Mosquito Spray Truck? If I didn’t, I could have typed this 10 times as fast. Thank goodness for word processor with deleting and spell check. I would have gone through 5 packs of type correcting paper.

Note: the author is a graduate of Gloucester Catholic High School, Class of 1963. 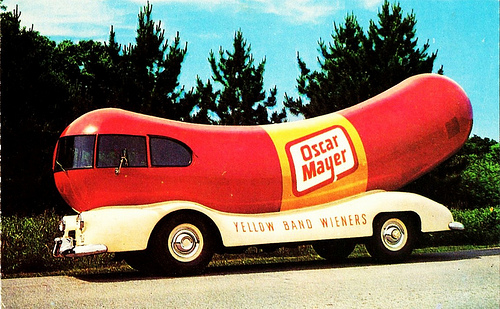 GLOUCESTER CITY NJ-A recent article written by Bomber Bennett titled “Down the Store” brought back so many memories about my parent's store on Morris Street. Bomber didn't mention our store in the text of his story, but it is shown on the map that was published with the article as #5.