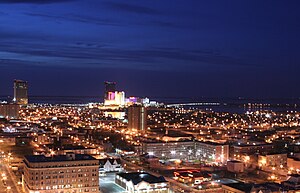 ATLANTIC CITY (NOVEMBER 30, 2011) – The Atlantic City Alliance (ACA), a not-for-profit corporation formed as a result of recent legislation signed by Governor Chris Christie to revitalize Atlantic City, has agreed with the Casino Reinvestment Development Authority (CRDA) to create a public-private partnership that will provide for a $150 million joint marketing campaign of Atlantic City as a destination resort with world-class facilities and attractions.

“This administration continues to work aggressively to put Atlantic City back on the map as a premier tourism and gaming destination.  We know that an important part of this effort will be to market Atlantic City and its attractions to visitors both domestically and internationally,” said Governor Christie. “Today’s $150 million joint marketing campaign between the Atlantic City Alliance and the Casino Reinvestment Development Authority is another example of how public-private partnerships can leverage critical resources to promote and highlight Atlantic City.   By ensuring a consistent, cohesive message to potential visitors, we will be able to bring new economic growth, job creation and prosperity to the region and the State as a whole.”

“This is a major step forward for Atlantic City, which will ultimately translate into increased tourism, greater economic investment and more jobs for New Jersey,” said Liza Cartmell, CEO of the Atlantic City Alliance. “We look forward to our partnership with the CRDA, the casino resort owners and the community to deliver on the pledge to get Atlantic City back on track.”

The five-year agreement reached designates the ACA as being responsible to develop and implement a comprehensive marketing plan, and provide recommendations to increase visitation to current attractions and venues, particularly during the off-peak months. The ACA is also primarily responsible for developing a brand identity in cooperation with CRDA.

CRDA will be responsible for the Master Plan, including development as well as clean and safe initiatives. CRDA also will have oversight over ACA’s budgets and closely collaborate in developing the marketing plans.  CRDA will oversee contributions of $30 million annually in private sector funds from the casino properties to support the marketing plan and Tourism District.

“The historic, bipartisan reforms signed into law earlier this year are beginning to deliver real measurable progress, and will be another major step in protecting the 2,000 businesses and the 100,000 jobs statewide which rely on Atlantic City’s robust tourism industry,” said Don Marrandino, ACA’s Chairman of the Board of Trustees.

“Atlantic City has endless tourist offerings that provide something for everyone, from celebrity chef restaurants, beaches, family entertainment and gaming, with accommodations at our world-class resort hotels. Today’s announcement will allow, for the first time, a joint marketing campaign that will showcase these assets, increase tourism and revitalize Atlantic City,” said John Palmieri, Executive Director of the Casino Reinvestment Development Authority.

The ACA’s efforts will be funded by a contribution of $30 million collectively made by all casino licensees to the non-profit organization for each of the five years of the partnership agreement’s term.

Atlantic City Alliance is a not-for-profit 501 (c)(4) corporation dedicated to the marketing of Atlantic City and the promotion of its tourism district. The ACA's primary goal is to develop a marketing strategy that continues Atlantic City's transformation into a premier destination resort.

ATLANTIC CITY (NOVEMBER 30, 2011) – The Atlantic City Alliance (ACA), a not-for-profit corporation formed as a result of recent legislation signed by Governor Chris Christie to revitalize Atlantic City, has agreed with the Casino Reinvestment Development Authority (CRDA) to create a public-private partnership that will provide for a $150 million joint marketing campaign of Atlantic City as a destination resort with world-class facilities and attractions.