Tuesdays with Jason Mattera...The Real Legacy of the Slobbering, Babbling Pol from Massachusetts


After his announcement that he won’t seek reelection, the Washington Post heralded the disheveled congressman Barney Frank​ as leaving a “legacy that crosses from legislative cornerstones to political confrontations to a historic place as the nation’s most prominent gay lawmaker.” 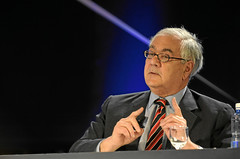 The paper continued:  “On the left, Frank was a hero both for his effort to rein in the nation’s largest banks and for his role in promoting gay rights, having been the first member of Congress to declare his sexual orientation while in office.”

Then there’s the New York Times.  To them, even Frank’s opponents carried a great deal of respect for the rambling Massachusetts politician.  While “bankers often disagreed with Mr. Frank’s policies,” said the Times, “many respected his command of arcane areas of finance, a rarity on Capitol Hill.”

Get a room, boys.

So since Barney’s boys in the press omit his role in our 2008 financial melt, we at HUMAN EVENTS go back to the videotape and present to you the real legacy of the slobbering, babbling pol from Massachusetts.

Tuesdays with Jason Mattera...The Real Legacy of the Slobbering, Babbling Pol from Massachusetts