Philadelphia, November 30, 2011 – Early this morning, Philadelphia police, working with a variety of City agencies, cleared a group of protestors from Dilworth Plaza who refused to leave the Occupy Philadelphia encampment to make way for a $50 million remake of the plaza on the west side of City Hall.

According to the Philadelphia Police Department, police officers made a total of 52 arrests – one 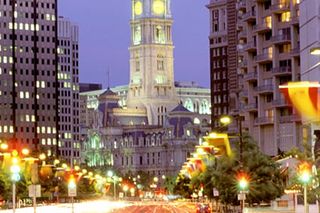 Mayor Nutter addressed the media after the encampment was dismantled. His edited comments follow:

The Dilworth occupation is over and that came as a result of a tremendously well-planned and well-executed operation by the Philadelphia Police Department in coordination with a number of other agencies, including the Managing Director’s Office, the Office of Emergency Management, the Street’s Department, Septa and a number of other entities.

Let me give you a brief summary of what took place. Shortly before 1 a.m., police closed off streets around City Hall, and shortly after 1 a.m., police vehicles arrived en masse at City Hall mainly in the Dilworth Plaza area.

Philadelphia police then secured the perimeter of Dilworth Plaza and issued three warnings to those who were still on the plaza after we had given numerous warnings over the last 10 days to two weeks, directly, that the construction project long planned for Dilworth Plaza was about to take place.

By 2 a.m., the Plaza was completely cleared of any people who had been there either sleeping or staying over night in any capacity. So the complete operation took about an hour. There were no fights, no injuries, no confrontations and no incidents on the Plaza. The Philadelphia Police Department executed this operation completely in accordance with the plan that had been in development for the past few weeks and all the components of that plan worked very well.

By approximately 3 a.m. the substantial cleaning of Dilworth Plaza was under way. [The Streets department said that 29 sanitation employees worked a total of 108 man hours and cleared almost 27 tons of trash from the Occupy Philadelphia site on the plaza.]

There were three officers injured during the course of subsequent operations not on Dilworth Plaza but in other locations. One officer had a shoulder injury, one had a cut to his hand, both of those officers were injured in the course of making arrests off of the plaza. One officer cut his leg while taking down a tent on the Plaza. One demonstrator to our knowledge suffered a foot injury when a police horse stepped on her foot.

The City’s outreach teams performed in exemplary fashion both this morning and over the course of the past few days. Since Sunday, outreach workers have helped about 49 individuals get placement, including 15 individuals this morning, 13 of those were placed in shelters, and two were relocated to what we call “safe havens.”

As you can see, bicycle fencing has gone up immediately. That will soon be replaced by traditional construction fencing to cordon off the entire Dilworth Plaza area. Dilworth Plaza is now closed to the public. It is a construction site, and we anticipate that work to start very shortly. We still have a lot of work to do as you can see out on the Plaza to clean it and further secure that area. The site is now a construction project that will last approximately 27 months, a $50 million project that will put nearly 800 to 1,000 people to work.

I want to thank the citizens of this great city for their patience during this entire process. We have worked hard to respect the free speech rights of those who wish to protest while also balancing the needs of our city to continue to operate in all its operations.

Let me say that Police Commissioner Ramsey, Deputy Commissioner Ross, the other deputy commissioners and Chief Inspector Sullivan are owed a tremendous debt of recognition and gratitude for the excellent operation that they performed and planned over the last couple weeks and kept us all informed in a detailed fashion during the course of this entire operation.

I also want to recognize and thank Chief of Staff Everett Gillison, Deputy Mayor for Administration and Coordination Rich Negrin, Deputy Managing Director Jazelle Jones and the folks from the Office of Emergency Management, OEM, Liam O’Keefe and Samantha Phillips.

This morning’s action was based on weeks of planning. The plan was flawlessly executed by a combination of a variety of forces. For almost two months, the City of Philadelphia acted with restraint, patience and respect toward the First Amendment rights of those who wished to protest and any others. Their free speech rights are important in this great city, a city of diversity. And certainly the Occupy Philadelphia movement is a diverse movement.

And that was certainly true this morning. We’ve had approximately 55 days of the Occupy Philadelphia movement in Philadelphia, and we have on every one of those days performed the way I asked our public employees to perform – treat people with dignity and respect, respect their First Amendment rights but at the same time make sure that we are able to operate.

From the start, members of Occupy Philadelphia said that they did not want to engage in violence or disruption. And I made it very clear to all our City employees that we would not destroy our record of respectful engagement with this group as we needed to clear the Plaza. We provided numerous warnings and advisories about this project, and literally from the day before Occupy Philadelphia arrived, I told them personally that we will respect your rights but we do have major project long in planning that is slated to happen here in the city to put people to work.

The police officers involved in this operation were hand-picked for this assignment and highly trained and disciplined. They showed a tremendous amount of restraint and professionalism in carrying out this morning’s operations.

In recent days, they have been given extensive training at roll calls and particularly on First Amendment issues. And those were repeated at the roll calls this morning and video taped. We also had extensive audio visual operations to document all the activity with this morning’s operations.

We want to thank again all of our public employees for the job they did, the citizens of this city for their patience and also to appreciate the important issues that Occupy Philadelphia and this movement have raised here in the City of Philadelphia, many of which I have talked about in the past quite honestly before there was an Occupy movement here in the United States of America.

Philadelphia, November 30, 2011 – Early this morning, Philadelphia police, working with a variety of City agencies, cleared a group of protestors from Dilworth Plaza who refused to leave the Occupy Philadelphia encampment to make way for a $50 million remake of the plaza on the west side of City Hall.