Our Reading Guide on Congressional Dysfunction

Congress’ approval rating is abysmal, and the failure of the congressional “super committee” to find a compromise on reducing the national debt has set off a new round of recriminations. 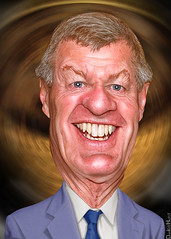 One senator on the super committee, Democrat Max Baucus (caricature) of Montana, told The Washington Post, “We’re at a time in American history where everybody's afraid — afraid of losing their job — to move toward the center. A deadline is insufficient. You’ve got to have people who are willing to move.”

Decrying partisanship is almost as old as the republic itself. But longtime observers say Congress has actually taken a turn for the worse — with more gridlock, more grandstanding, less compromise to get things done.

Old rules are being used in newly aggressive, partisan ways, and routine Congressional activities have become politicized — most notably, the vote to raise the nation’s debt ceiling. Once a nonissue, it brought the nation to the brink of default.

As former Republican Congressman Mickey Edwards points out, “Leaders of both chambers have embraced the strategy of precluding minority amendments, out of fear that even members of the majority party might vote for them.” This means, Edwards argues, that “to be in the minority is essentially to be made a nonfactor in the legislative process.”

The use of filibusters to block votes in the Senate used to be a last-ditch tactic, but in 2010, Republicans were filibustering even routine Democratic initiatives, effectively paralyzing the Senate. Democrats had previously ramped up the use of filibusters to oppose George W. Bush’s agenda, but Republicans “appeared to be taking the filibuster to a new level,” McClatchy Newspapers reported, even filibustering “15 nominees to mid-level jobs that formerly got routine approval.” Here is a helpful bar graph from McClatchy showing the trend. (Efforts to overhaul the filibuster earlier this year failed.)

The confirmation process of many of President Obama’s nominees has also lagged, creating gaps in the Treasury and Federal Reserve, leaving regulatory agencies without leaders. It has also resulted in prolonged judicial vacancies, which has sparked criticism from Chief Justice John G. Roberts, who said the delays are impairing the judicial system.

How exactly did it get so bad? Here’s our reading guide to a few smart, in-depth explanations of how Congress became so dysfunctional.

Norman Ornstein’s Foreign Policy article — “Worst. Congress. Ever.” — provides a helpful overview of what’s the matter, from a man who’s been a Congressional expert for decades. (Ornstein and Thomas E. Mann co-wrote a 2006 book, "The Broken Branch: How Congress Is Failing America and How to Get It Back on Track.")

Ornstein explains that the nation's partisan makeup has changed dramatically since the late 1960s, when the country was less divided between red and blue states. Conservative Democrats from the South and liberal Republicans from the North regularly crossed party lines on different policy issues.

Since then, both parties have consolidated geographically — and become more homogenous and more partisan.

Looking at Congressional voting records in 2010, the National Journal’s Ron Brownstein found that the most left-leaning Republican senator still voted more to the right than the most conservative Democrat. The House, too, had an unprecedented level of polarization, with most politicians voting in lockstep with their parties.

This makes life easier for party leaders, Republican Trent Lott, the former Senate majority leader from Mississippi, said, but “in terms of getting things done for the country, that’s not the case.” (Brownstein is the author of a helpful book on polarization, "The Second Civil War: How Extreme Partisanship Has Paralyzed Washington and Polarized America.")

And the partisan divide isn’t just in Congress. As Bill Bishop documented in his book"The Big Sort: Why the Clustering of Like-Minded America Is Tearing Us Apart," voters are likelier to live in politically homogenous counties. “In 1976, only about a quarter of America's voters lived in a county a presidential candidate won by a landslide margin. By 2004, it was nearly half,” Bishop found.

Members of Congress are raising money instead of building working relationships in D.C.

In the 1980s, Cooper argues, most members of Congress lived in Washington with their families and socialized with each other across party lines. Hotly contested campaigns cost only a few hundred thousand dollars, and political parties did not expect that politicians would make donations to their colleagues.

“Gingrich ordered freshman Republicans not to move their families to Washington, D.C., because he thought they needed to campaign full-time at home,” Cooper wrote. “Soon everyone belonged to the Tuesday–Thursday Club. Members became strangers, the easier for them to fight.”

Cooper isn’t the only one to emphasize Gingrich’s role. Edwards, the former Congressman, told the Associated Press that Gingrich “greatly increased the party-versus-party polarization.” According to Edwards, Gingrich pushed his fellow Republicans to focus less on actually making laws and more on being “a champion of the Republican cause, constantly at war, defeating Democrats."

Cooper notes that campaigns now cost millions of dollars, and that members of Congress are expected to pay hundreds of thousands of dollars in party dues, as well as to make large donations to other candidates in their party.

George Packer’s New Yorker story on Senate dysfunction — perhaps the most vivid and comprehensive take on this issue — also elaborates on the impact that fundraising pressure has on senators.

“Of any free time you have, I would say 50 percent, maybe even more,” is spent on fundraising, one senator told Packer. “It sucks up time that a senator ought to be spending getting to know other senators, working on issues,” another said.

In his Boston Review article, “Ending the Permanent Campaign,” Ornstein notes that this hyper-focus on fundraising and campaigning is related to the new competitiveness of Congress. Democrats had a “stranglehold” on the House of Representatives for four decades. After Republicans seized control of the House in 1994, each election “now provides a plausible scenario for a power shift.” Campaigning has grown in importance because the stakes are higher.

Writing in response to Cooper in the Boston Review, Dana Houle, the former chief of staff to former Democratic Congressman Paul Hodes, argued that comparing Congress today with Congress in the 1980s, as Cooper does, isn’t quite fair. It was because a single party reliably dominated the House that Congress members could “spend more time in Washington, D.C., focus on legislating, and build relationships with fellow members. Serving in Congress is easier and probably more rewarding when one does not face a strong possibility of defeat in every election.”

Packer’s New Yorker article on the Senate also highlighted how good, old C-SPAN may have made things worse. “After C-SPAN went on the air, in 1979, the cozy atmosphere that encouraged both deliberation and back-room deals began to yield to transparency and, with it, posturing,” Packer wrote.

(One 2003 study, looking at the years 1959-98, found that the presence of television cameras on the legislative floor correlated with an increase in Senate filibusters.)

Financial shakeups in the media business, including the decline and even bankruptcy of regional newspapers, also have changed political coverage. In 2010, while he was still in office, former Democratic Sen. Chris Dodd of Connecticut told Packer, “I used to have 11 Connecticut newspaper reporters who covered me on a daily basis. I don’t have one today, and haven’t had one in a number of years. Instead, D.C. publications only see me through the prism of conflict.”

Of course, a stalled Congress might not be such a bad thing, depending on your perspective. William J. Bennett argues that gridlock is a side effect of an ideological divide on policy issues. “We are in the midst of a serious philosophical battle over the future of this country — a battle between a small, limited government system and a big government entitlement state,” Bennett wrote as part of a CNN series called “Why is our government so broken?" He concluded: “Don't mistake broken government for the growing pains of a democratic republic.”

Our Reading Guide on Congressional Dysfunction

Congress’ approval rating is abysmal, and the failure of the congressional “super committee” to find a compromise on reducing the national debt has set off a new round of recriminations.