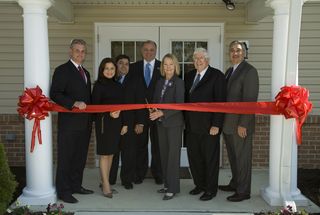 The dilapidated homes at Bentley Woods are gone. In their place stand four attractive new three-story buildings and the promise of opportunity – for both residents and Glassboro. Another 20 units are slated for completion this fall. The final 20 units are expected to be completed by the end of January 2012, according to CIS.

Residents were living in buildings that had been severely neglected, according to CIS Founder/Owner and CEO Christiana Foglio. “After years of planning, commitment and collaboration between the town of Glassboro and the entire CIS development team, we were able to make this project a reality,” said Foglio. “Our vision for Whitney Crescentwas to create a new neighborhood that complements the many amenities and diversity of Glassboro.”

The revitalization of this Gloucester County community posed an unusual challenge. CIS demolished nine buildings in phases to redevelop the 9.5-acre site, and relocated tenants before rebuilding the community. The firm worked with existing residents to find temporary housing while construction was underway. Those households have received priority residency in the new buildings, according to CIS. The first 40 units have been fully occupied.

“The residents initially approached the Borough looking for help in decreasing criminal activity at Bentley Woods, and now they have returned to a beautiful new community, in an ideal location,” said Councilman Hector Cabezas.

Whitney Crescent incorporates affordable living with a maintenance-free lifestyle and numerous amenities. The energy-efficient apartments include hardwood floors, washers and dryers in each unit, and dishwashers. Residents also benefit from 24-hour emergency maintenance and onsite property management. The community is situated near Rowan University and the Pitman Country Club and is within easy access to the Atlantic City Expressway.

Downtown Glassboro has been undergoing a revitalization effort in recent years in an effort to infuse the area with new businesses, residences, culture and recreation. Redevelopments have encompassed Rowan Boulevard and several distinct neighborhoods bordering Glassboro’s downtown and Rowan University.

In addition to Whitney Crescent, CIS has successfully revitalized numerous projects in   Elizabeth, Bordentown, and Rahway, N.J., just to name a few. The for-profit, certified woman-owned business enterprise (WBE) specializes in developing a broad spectrum of multi-family properties, ranging from multiplex apartments and townhomes to mid- and hi-rise complexes, valued in excess of $350 million.