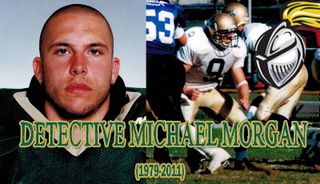 the passing of Detective Michael J. Morgan, Jr. of the Newark (NJ) Police Department, who died on November 7 in an off-duty shooting. He was 32 years old. Morgan was a four-year football player for NJCU from 1997-2000 as a linebacker and fullback.

Morgan had served six years on the
force of the Newark Police Department and had risen to the rank of detective. He was part of the city's drug and gang unit and had recently been promoted to the city's Special Investigations Unit.

He often volunteered as part of Newark's Safe City Task Force and played a significant role in the more than 600 gun arrests recorded as part of the program.

As a student-athlete, Morgan played in 39 games over his four year career. He was originally recruited out of Queen of Peace High School as a linebacker, before being converted to a fullback as a junior in 1999. For his collegiate career, he registered 45 tackles. Offensively,Morgan collected 15 receptions for 97 yards and carried the ball 25 times for 76 yards.

His most prominent season came as a senior in 2000, when he was the lead blocker for a pair of First-Team All-NJAC Michael Morgan (#9, to right), blocking for NJCU Hall-of-Fame running back Daniel Harrison (#26) against Kean University on October 14, 2000.
running backs, as the combination of NJCU Hall-of-Famer Daniel Harrison (679 yards) and Frankie Sinclair (515 yards) rushed for a combined 1,194 yards with Morgan in the backfield contributing. The 5-foot-9, 200-pounder wore No. 9 that season.

Morgan started the final five games of the 2000 campaign and played in all 10 contests. He had six receptions for 51 yards with a long play of 15 yards and added four carries for 10 yards. He also contributed defensive with seven tackles, including five solo hits.

Morgan became a fullback in 1999, blocking for Harrison in a First-Team All-NJAC season. Individually, Morgan made nine receptions for 46 yards including a long play of 19 yards, and had 21 carries for 66 yards (long of 14). He played in all 10 games as a junior. Defensively, he made four solo tackles, including one for a loss of 20 yards, one forced fumble and one fumble recovery.

As a sophomore in 1998, Morgan, a linebacker, amassed 30 tackles (13 solo, 17 assisted) in nine games, including two stops for losses. He made four tackles while playing in all 10 games as a freshman in 1997.

Morgan, who came to NJCU from Belleville, NJ, was a three-year varsity standout at Queen of Peace in North Arlington, NJ where he graduated in 1997. He was an All-Conference performer, team captain, and Most Valuable Player for the Golden Griffins. Morganalso was a standout on the school's powerlifting team and earned a gold medal in the sport at the Junior Olympics. He was Queen of Peace's captain in 1995 at the powerlifting national meet.

NJCU alumni are encouraged to leave their tributes to Detective Morgan on the Gothic Knight athletics Facebook page.
—www.njcugothicknights.com—

the passing of Detective Michael J. Morgan, Jr. of the Newark (NJ) Police Department, who died on November 7 in an off-duty shooting. He was 32 years old. Morgan was a four-year football player for NJCU from 1997-2000 as a linebacker and fullback.

Morgan had served six years on the