GOBBLE! GOBBLE! A rafter of turkeys have taken over Sherwood Avenue in the Highland Park section of Gloucester City. According to Joan Williams, a resident of that street, the turkeys are attacking people and damaging vehicles with their pecking. “The eight baby turkeys that were born in the spring are now as big as the adults. Some of my neighbors are afraid to go outside for fear of being injured by the birds.” She was going to ask mayor and city council for some help with the problem. 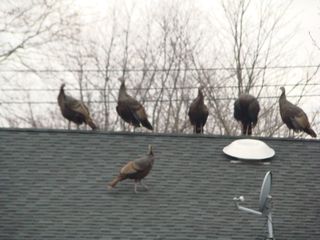 Over the last several years turkeys have been spotted in Gloucester Heights, blocking  traffic on Nicholson Road, on Maple Avenue (Cypress Gardens) sitting on roof tops, in the woods behind Gloucester High School and on Lake Drive and Sixth Street in Brooklawn.

According to the NJ Division of Fish and Wildlife website by the mid-1800s, turkeys had disappeared in New Jersey due to habitat changes and killing for food. Division biologists, in cooperation with the NJ Chapter of the National Wild Turkey Federation, reintroduced wild turkeys in 1977 with the release of 22 birds. In 1979 biologists and technicians began to live-trap and re-locate birds to establish populations throughout the state. By 1981 the population was able to support a spring hunting season, and in December, 1997, a limited fall season was initiated. 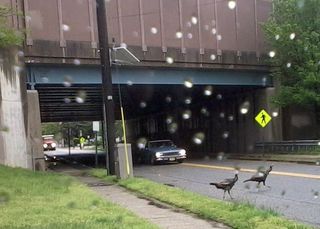 wherever there is suitable habitat. Even in South Jersey, where wild turkeys had been struggling just a few years ago, intensive restoration efforts have improved population numbers significantly. The population is estimated at 20,000 - 23,000 with an annual harvest of more than 3,000.

An adult eastern tom can range anywhere between 18 -25  pounds.  Hens don't get quite as large though.

We reached out to a biologist Bob Eriksen who is affiliated with the NJ Chapter of the National Wild Turkey Federation to see if he has a solution to the problem.

Eriksen writes,
"There are two possible explanations for the wild turkey behavior you describe. One is that the birds in question were raised in captivity where they imprinted on humans and consequently have no fear of people. Imprinted birds actually see humans as members of their own species and will actively try to exert their influence over them as they attempt to establish a pecking order. The second possible origin is that this flock of turkeys are "urban wild turkeys". As wild turkeys expand their range and follow wooded corridors such as stream edges into residential areas they can become more and more accustomed to seeing people. Often wild turkeys in such areas are fed by well-meaning people. Provisioning tames the birds down, causes them to begin to view humans as a food source and after a generation or two allow close approaches by people. During the spring breeding season and in the early fall when daylight hours are similar such "habituated" wild turkeys may become aggressive. Males are much more prone to this than hens.
"Homeowners should not feed wild turkeys. Nor should they encourage them to become tame. Instead if wild turkeys move into residential areas they should be discouraged from overstaying their welcome by harassment. People can chase the birds, spray them with garden hoses or placing dogs in the yard confined by an invisible fence or long lead so that they can harass the birds.
"If the birds truly are acting aggressively homeowners should call the New Jersey Division of Fish and Wildlife. The Division is the state agency with the authority over all wildlife species. The Wildlife Control Unit at 908-735-8793 can provide and if necessary provide assistance."

WHAT A SURPRISE! Why skimming through the New Jersey Press Association (NJPA) website (http://www.publicnoticeads.com/NJ/search/searchnotices.asp ) looking for public notices advertised by the city of Gloucester City NJ we discovered the recent $7,075,000 bond sale advertised in the Courier Post for a fee of $392.04.

The sale was not published in the Gloucester City News which is a violation of the state’s Local Bond Law specifically statue 40:A 2-19.

Marc Pfeiffer, the State’s Deputy Director for Local Government Services said, “It is up to the City Clerk (Kathy Jentsch) along with the City’s Bond Council (Parker McCay) to follow the law. If they do not follow Statue 40A:2-19, the bonds sold by the City would go from non-taxable bonds to taxable.”  He added that the City could be sued by the people who purchase the bond (s). “

An attorney from Parker McCay did respond to our questions about the sale however she refused to go on the record, stating, “I do not speak for Parker McCay. I’ll will have someone contact you who will speak for the firm.”

Ten days later we are still waiting for that call.

Jack Lipsett, City Administrator,said this bond sale included a consolidation of  some other bonds. Some of those notes were maturing. The bond law requires advertisement of least 7 days prior to the sale. Because of the Gloucester City News deadline we were forced to use the Courier Post. As for the state’s response to you, I was not privy to that conversation. However, I am sure that if all the facts were known they would conclude we followed the law. The Gloucester City News is one of the City’s legal newspapers. We try to always use the NEWS for our legal publications. But there our times when that isn’t possible because of the paper’s deadline.”

Incidentally the City bond and loan debt totals $24,266,276. That figure includes the recent $7 million plus bond sale. The City's Bond Rating A+.  Recently the Associated Press reported that the community of Salem NJ is one of 9 cities in the United States to file for bankruptcy. How much is Salem carrying in bond debt? $10,098,000.

The NJPA website also showed a number of other legal notices from the City and the Board of Education, that were advertised in the DAILY JOURNAL, Vineland. Lipsett said no one from the City authorized those advertisements. Margaret McDonnell, School Business Administrator was contacted about the ads but she did not respond to our question.

We obtained hard copies of the DAILY JOURNAL and found none of those legal notices appearing in the paper. The editor of the Journal was asked why the NJPA would list those City legals as being advertised in his paper if they were not? We also inquired if the City or City School Board had spent any money on ads with his paper? His response, “It is none of your business.”

Send your Tip or Snippet to cnbnews@verizon.net

GOBBLE! GOBBLE! A rafter of turkeys have taken over Sherwood Avenue in the Highland Park section of Gloucester City. According to Joan Williams, a resident of that street, the turkeys are attacking people and damaging vehicles with their pecking. “The eight baby turkeys that were born in the spring are now as big as the adults. Some of my neighbors are afraid to go outside for fear of being injured by the birds.” She was going to ask mayor and city council for some help with the problem.