Ewing, NJ … With the sun setting over Lions’ Stadium after a thrilling 27-21 homecoming win for The College of New Jersey football team, senior offensive lineman Seth Konoza (Beaufort, SC/Beufort) went down on one knee at the request of his high school sweetheart.

Ashley Maile, currently a senior at the University of South Carolina, was donning a 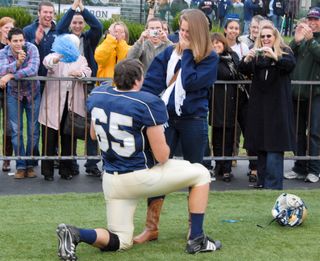 TCNJ football jersey and wanted a photo taken with her boyfriend down on the field. With this being her final visit to one of his college football games, she envisioned a picture where she rested on his lap as he knelt down on the turf. What transpired after was beyond her wildest dreams.

Once the photo was taken, Konoza remained on one knee, gazed up at his girlfriend of six years, and asked her to take his hand in marriage.  Her reaction was one that was indicative of total surprise.

“She sort of fell down,” Konoza laughed when telling the story. “Then she came up and gave me a big kiss. She never really said anything, so I had to ask her if that meant ‘yes’.”

Much to his relief, Maile accepted his proposal. The newly engaged couple went out to dinner to celebrate with family before Maile hopped on a plane bright and early Sunday morning to fly back to South Carolina. Waiting at the airport for her was her mother, Michelle.

The Palmetto State is where Konoza and Maile grew up. They attended Beufort High 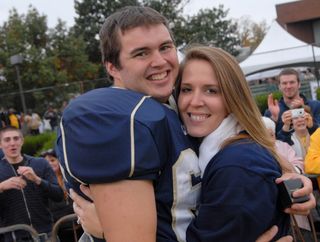 School and began dating their sophomore year. Fittingly, the gridiron was the site that spawned their relationship. In storybook fashion, the rough and tumble football player asked to court the wide-eyed cheerleader during halftime intermission. Well, sort of storybook fashion.

“He tried to ask me out with an IM (instant message) during class”, recalled Maile. “I responded that I might say yes if he asked me in person. So he asked me out during halftime of the football game. We ended up going to the movies and since we didn’t even drive, we had to have our parents drop us off and pick us up.”

After dating Maile through high school, and with college on the horizon, Konoza became certain he wanted to pursue a degree in interactive multi-media. He also had aspirations of playing college football, and when TCNJ’s coaching staff began recruiting his talents, Konoza saw the Ewing campus as the perfect fit. With Maile electing to pursue a degree in Health and Exercise Science at South Carolina, it meant their relationship would have to continue long-distance.

“Ashley was really supportive of me going away to college,” said Konoza. “It was tough at times, but we talk on the phone a lot and typically use Skype every day. I also spent my summers back home in South Carolina.”

This past summer, Konoza began plotting his game-day plan. He spoke to his parents and then requested permission from Ashley’s mother and father. By August, he had an engagement ring and knew Ashley would travel up to TCNJ for homecoming.

With clear blue skies, TCNJ’s College Chorale performing the national anthem, and seventh-ranked Montclair State University on the opposing sideline, the stage was set. At this point, all Konoza needed was a win.

The Lions jumped out to a 20-7 halftime lead, but the Red Hawks stormed back to take a 21-20 advantage in the third quarter. In the final period of play, quarterback Jay Donoghue (Shamong, NJ/Seneca) hit Joe Falco (Ocean Twp., NJ/Ocean Twp.) with a seven-yard touchdown pass and TCNJ held on to hand Montclair State its first loss of the season.

With a victory in the books, Konoza now faced real pressure. His father, Mike, was down on the sideline holding the ring. He handed it off to his son’s teammate and friend, Kevin Allgood (Chatham, NJ/Chatham). Allgood passed the ring along to Konoza, and after Ashley was granted her photo wish, Konoza iced the perfect day with a diamond ring.

A date will be set once their immediate futures are determined. Maile will pursue a graduate degree in physical therapy, while Konoza will begin the job hunt after graduating this spring. He spent this past summer building a business website for TCNJ graduate Athur Scotto ‘83, whom he met during TCNJ Football Career Opportunity and Mentoring Day.

As for now, Ashley has been led around campus by her left arm, showing off her shiny, new friend.

“I had absolutely no idea and was totally surprised,” she said. “I’ve been telling everyone the story ever since I got off the plane.”

Ewing, NJ … With the sun setting over Lions’ Stadium after a thrilling 27-21 homecoming win for The College of New Jersey football team, senior offensive lineman Seth Konoza (Beaufort, SC/Beufort) went down on one knee at the request of his high school sweetheart.