Oehler, who has an outstanding resume,  has been around the game of baseball

most of his life. A 1999 graduate of Audubon, Oehler was a two-time all-state catcher. He earned two state titles at Audubon and three more at Brooklawn Senior American Legion, where Oehler was also on two regional champions. That earned him two trips to the American Legion World Series. He continued his love for baseball at Old Dominion where he was a four-year starting catcher. At Old Dominion University he was team captain his last two years, the same two seasons he caught Justin Verlander, the Detroit Tigers star pitcher.

After playing two years professionally with the independent Mid-Missouri Mavericks, Oehler began his coaching career. He was an assistant coach for two different schools in two seasons in Virginia. The last four years he was an assistant at Pennsville, a Tri-County Conference opponent of Gloucester.

"It's a great opportunity in a division I know a lot about," Oehler said. "What I love is getting to coach at Gloucester City High School, because they are tough, hard-nosed kids,"

AND THE WINNER IS?-Brandon Blackiston was one of four students to win the Young Christian Leaders $1000 scholarship September contest. A graduate of Gloucester City High School, Brandon is the son of Gloucester City Police Officer Bud and Debbie Blackiston. He is presently attending Lycoming College, Williamsport, Pa.

Congratulations to Leo A. Holt who was elected chairman of the board of trustees at The Jackson Laboratory, a biomedical-research institution and National Cancer Institute-designated Cancer Center in Bar Harbor, Maine. He replaces New York investment executive Brian Wruble. Holt is president of Holt Logistics Corp., a marine terminal and logistics-systems developer and operator, with facilities in Philadelphia and Gloucester City. 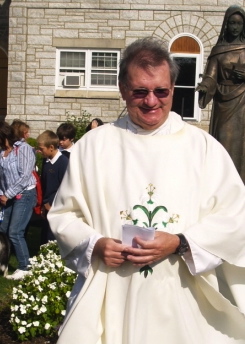 released earlier this month. From the distributor’s web site. “Thomas McIntyre is the teacher who searches tirelessly for the "teachable moment", the priest who wants nothing more than to be a pastor, the friend who looks for evidence of the need in the other's journey without being told. Monsignor McIntyre (PHOTO) has spent the greater part of 2010 and 2011 recovering from the serious results of a fall. For many years Monsignor wrote a column Teachable Moments for the Gloucester City News and the Catholic Star Herald.  To purchase the book go here http://www.lulu.com/spotlight/Leaning

Government/Real Estate Doesn’t Mix...Another Example-U.S. District Court Judge Jerome B. Simandle issued a summary judgement last week in Camden Federal Court against Grove Street Realty Urban Renewal, the owner of The Rivercove apartment complex, located within the RiverWinds complex, West Deptford.  Grove Street owes $34,574,558 to mortgage holder GE Business Financial Services (GEBFS)–more than $2 million more than the original loan amount from 2007. Grove Street also owes more than $300,000 in back taxes to the township and must pay the community an annual $386,000 payment in lieu of taxes under the (PILOT) program in place.

For the most part the RiverWind project has been one big financial headache for township residents since it was built some 10 plus years ago. As of December 2010 the debt owned by the township totals $133,991,682. According to West Deptford The Truth that means every man, woman and child in West Deptford owes $6,181.  Website http://www.wdtruth.org

Tough Financial Times for Parishes-The Catholic parish of Emmaus, (Sacred Heart) Mt. Ephraim is having financial problems. Monsignor Leonard G. Scott, the newly appointed pastor of the church, sent out a letter to parishioners last week asking members to increase their weekly donation. Emmaus was formed last year by combining the parishes of Holy Maternity in Audubon and Sacred Heart. The summary of the parish’s operating income/expenses for the fiscal year ending June 30, 2011 shows income of $429,647 and expenses of $726,614. Leaving a deficit of $296,968.  Emmaus is not alone; other parishes in the immediate area are having the same financial problem. In June St. Mary Parish, Gloucester City, reported it owed $596,000 for money it borrowed from the Camden Diocese to keep the grammar school opened. Even though the school was closed at the end of this school year it still had outstanding debt.

Tip or Snippet send to CNBNEWS@verizon.net