(Editor’s note: These remarks were presented by Mr. Munn during the recent dedication of the Freedom Pier on the Delaware River in Gloucester City..

To reach this part of the pier, where we are now, you have crossed over what, in my opinion, is one of the most historic properties in Gloucester City. The only other property with more outstanding history is Proprietors Park.

The history of this property pre-dates historical records. There is evidence here of native Indian occupation that dates back eight thousand years!

In 1677, a committee of Quakers directed by Dr. James Wasse laid out plans for settlement in 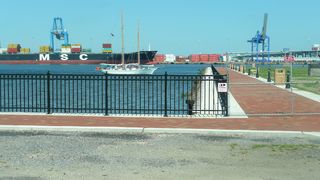 the Delaware Valley. The plan of what became Gloucester consisted of short lots and long lots with a central town square, which lots could be purchased outright, or were included in a purchase price of a 200 acre plot in the town’s Liberties, which today would include Brooklawn, Bellmawr and part of Mt. Ephraim.

The town bounds included most of present Gloucester City. If you know where Brick Street is today, it is a remnant of the original town boundary which ran from Little Timber Creek to Newton Creek.

cnb photo: The building was used by the Coast Guard until the 1990's. Now it is occupied by Holt Logistics.

However, settlement of Gloucester did not begin in 1677. The main problem arose between the London proprietors and the Yorkshire proprietors over settlement. London settlers came to 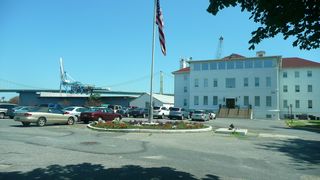 Gloucester (although the area remained unnamed); Yorkshire settlers went to “above the falls” or around Trenton.

Settlement was also affected by the problems the Quakers had with the British crown and parliament over the rights of the Proprietors and the settlers governing themselves. Beginning in the 1680s people began to inhabit the present city area, but there were not many.

The town lots are located in the area bounded by Monmouth Street, Burlington Street, which used to be called Third Street, extended to about present Jersey Avenue, then to the river. The town had 89 lots which could be identified by their assigned number. This property, along with Proprietors Park, represents approximately half of the original location of the town planned in 1677.

The first owner of this property, Matthew Medcalf, purchased lots 2,3, and 4 of the Gloucester Town plan, surveyed to him on 25 November, 1689. He built a sizeable house shortly thereafter. From that time, until the construction of Hugg’s Tavern in 1721/2, Medcalf’s house served as the town’s gathering place. The remains of his house are located not far from the corner of the present building.

A few words about Matthew Medcalf. He followed the teachings of the Society of Friends, and became of the trustees of the original Newton Meeting. His brother-in-law was William Cooper of Camden. Even though a Quaker, Medcalf hosted the militia drills that had been mandatory under the terms of settlement.

In 1704, the trial of a women accused of infanticide (killing and infant) brought the Colonial Governor of the colony, Lord Cornbury, to Gloucester to preside over the trial. He occupied Medcalf’s house while here.

During the Revolutionary War, Lord Cornwallis used the house as his head-quarters. Medcalf also operated a ferry for a brief period, and an ordinary (a tavern that did not provide rooms, only food and drink). Medcalf gave up the ordinary when he became sheriff of Gloucester County.

Medcalf willed the property to his son, Matthew Jr., and he in turn willed to his daughter. She sold the property to Samuel Harrison. Harrison acquired all of Medcalf’s holdings north of Market Street and William Hugg acquired the properties south of Market. The reason this has become known recently is because the deed of this transaction was not recorded until 1935, although the conveyance occurred in 1747.

Harrison sold property to Joseph Ellis. During Ellis’s occupation, he operated a tannery, containing 27 vats, manned by three of his slaves. Ellis also began a fishery as he owned the fishing rights between Market Street and the mouth of Newton Creek. The farm increased in size to 107 acres.

The heirs of Ellis passed the property to Robert Wharton Sykes, who sold it to David S. Brown. Brown transferred title to the Gloucester Land Company, who in 1882 razed the house. At that time, squatters probably occupied the building. According to some local historians, Mrs. Powell lived there, but there is no documentation that Arthur Powell ever owned the property.

In 1888, William J. Thompson acquired the property through a straw-buyer as the Land Company did not wish to sell to him. Thompson’s share of the Ellis farm accounted to 9.86 acres, upon which he had constructed a 22-room, Queen Anne style house designed by Hazelhurst and Huckle, architects from Philadelphia for his wife and those of his ten children still living at home.

Thompson lost the property in 1910 to the federal government after declaring bankruptcy. He then moved to the Henry West house, now part of Gloucester Catholic High School.

The government had been looking for a property along the Delaware River to provide facilities for the processing immigrant arrivals requiring detention. By 1912, the Commissioner of Immigration announced the construction of a detention center, almost finished, as well as other improvements to the property including the construction of a pier and a sea wall, also under way.

The extensive mud flats in front of the property and extending north to Newton Creek made a pier necessary to reach water deep enough to allow ships to dock. The original plans called for a pier 300 feet wide and 440 feet long.

In 1913, while still under construction, the pier suffered severe damage from a wind storm. The resulting effect caused a reduction in the size of the pier to 250 feet wide, 375 into the river. Because of the irregular shoreline, the south side extended 392 feet. By 1914 the completed pier became useable. In that year the ferry boat “Dauntless” delivered 70 detainees to the detention center.

An inspection house originally planned to be built on the pier remained unfunded. The government modified Thomson’s mansion to accommodate administrative offices, with an apartment for the onsite administrator. A two-story passageway connected the mansion to the detention center.

In addition to immigration responsibilities the facility, during WWI it became an interment station for alien enemies. By the end of the war most detainees had been transferred to other facilities. The detention center revived these duties during WWII.

Following the end of the war in 1945, and the United States Coast Guard took over the facilities for use as a base for maintaining channel markers, and the maintenance and repair of buoys.

The Coast Guard razed the Thompson mansion in 1949. The demise of the facility reflected a change in the immigration laws following the end of WWI and the role of the government in reducing military facilities following WWII. The government planned but never funded a building on the pier.

Today the building is a classic example of the architecture the government used for planned facilities, and, as I understand, only a few of this type remain in use. The people of Gloucester City can be proud that this structure and pier are here, and with this dedication its future is secure.

Gloucester City residents will be able to continue to watch the activity on the river and be proud to be aware of all the history that happened here.

(Editor’s note: These remarks were presented by Mr. Munn during the recent dedication of the Freedom Pier on the Delaware River in Gloucester City..

To reach this part of the pier, where we are now, you have crossed over what, in my opinion, is one of the most historic properties in Gloucester City. The only other property with more outstanding history is Proprietors Park.

The history of this property pre-dates historical records. There is evidence here of native Indian occupation that dates back eight thousand years!