Letters: The Differences Between Tea Party and Occupy Wall Street-cnbnews.net

You are probably aware of the Occupy Wall Street movement that has been spreading across the country and around the globe.  It has become almost impossible to even turn on a TV without seeing coverage of these protests.

The media began comparing the movement to the tea party movement early on and they are still continuing to try and make that comparison.  Other than the fact that both movements are angry about the banks being bailed out several years ago, there isn't much of a comparison.

Let's look at a few of the differences of the two movements:

Tea Party: The Tea Party movement stands on the principles of fiscal responsibility, limited government and free markets.  We believe Washington is the problem and smaller government is the answer!  Washington needs to get out of the way and let the free market system work.  Tea Party activists embrace capitalism and expect our elected representatives to rely upon the Constitution of the United States to govern our country. We are freedom loving Americans that are respectful, patriotic and violence free.

Occupy Wall Street: The protestors of the Occupy Wall Street (OWS) believe that we need more government. They believe we need more government programs and regulations.  They want social and economic justice for all in this country.  OWS believes that Washington can spend our money better than we can.  The bottom line is that they want to fundamentally change America and all that she represents.  The majority of people involved in the OWS movement are radical leftists and progressives that want socialism and/or communism.  These protestors have been violent on more than one occasion across the country.

Look at this OWS protestor attacking a police officer. 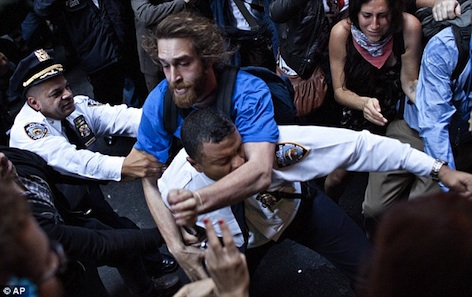 I know, it is hard to believe that this is happening right here in America, but it is a reality. Just last weekend, the OWS movement received the endorsements of the American Nazi Party and the Communist Party.

Watch this short video of the Communist Party participating at the OWS protest in Chicago. 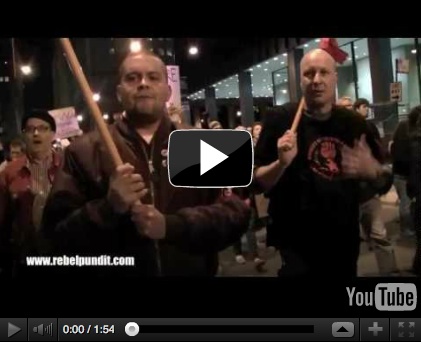 Recently, pollster Douglas Schoen polled protestors in Zucotti Park and his findings indicated that almost a third of the protestors in the Occupy Wall Street, had no problem using violence to advance their agenda.  The Wall Street Journal published an article giving more details about this poll.

These “occupiers” are a well organized group of individuals. They are raising hundreds of thousands of dollars for the cause and amassing an enormous amount of food and supplies from donations.  Earlier this week it was reported that they have raised almost $300,000 for their effort.

We must fight back and stand strong for our cause of protecting liberty and freedom. We cannot just sit by and let these radical leftists fundamentally change this country that we all love so much.

We can continue to fight with generous contribution.  Please consider contributing $10, $25, $50, $100 or $500. You financial support helps to give us the resources we need to succeed.

Please stand with us and support our efforts to stand for liberty and freedom by making a generous contribution HERE.

America needs our support and we need your support!  We cannot do this without you.

Letters: The Differences Between Tea Party and Occupy Wall Street-cnbnews.net

You are probably aware of the Occupy Wall Street movement that has been spreading across the country and around the globe.  It has become almost impossible to even turn on a TV without seeing coverage of these protests.