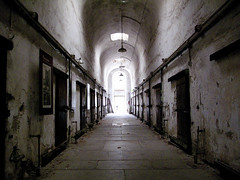 Located inside the walls of Eastern State Penitentiary, a real massive abandoned prison at 22nd Street and Fairmount Avenue in Philadelphia, PA, Terror Behind the Wallsattracts over 100,000 visitors from around the world and is consistently ranked among the top 10 haunted attractions in the country.  In 2011, Terror Behind the Walls runs on select evenings from September 23 through November 12.

For the first time ever, the event designers are launching two brand new attractions in a single year.  The Gauntlet is a high energy opening attraction for the show, featuring overhead catwalks and custom props above an outdoor maze.  The second new attraction, Break Out!, is a new finale consisting of an outdoor scare zone in the final courtyard before visitors leave the event.

To celebrate the 20th anniversary of Terror Behind the Walls, there will be a special encore performance on Saturday, November 12, 2011.  On this night only, visitors will have the opportunity to mix and mingle with haunted house owners and operators from around the country who will be converging on Eastern State Penitentiary for a first ever postseason performance of Terror Behind the Walls.  Also on hand will be paranormal celebrities talking about some of the firsthand experiences they've had with real ghosts inside the penitentiary complex.  Admission to the event includes all six haunted attractions of Terror Behind the Walls.  Tickets for Encore Night are limited and must be purchased in advance online.

After an extremely popular first year, Eastern State Penitentiary's "After Dark VIP Tour" returns for 2011.  This ultimate Halloweenexperience begins with an hour-long, guided flashlight walking tour of this National Historic Landmark.  Highlights include the cellblocks, Death Row, Al Capone's cell, and the underground punishment cells below Cellblock 14.  Following the tour, guests will be escorted to the front of the Terror Behind the Walls' lines.  Visitors can remember their evening with a souvenir photo, taken inside the penitentiary, and a special Terror Behind the Walls LED flashlight (included in admission).

The "Eastern State After Dark VIP Tour" is $79 per person Sundays through Thursdays and $99 per person on Fridays and Saturdays.  Available dates and times are listed on the Terror Behind the Walls website at www.easternstate.org/viptour.  Each tour is limited to 20 people.  Tickets must be purchased in advance.

A Massive Haunted House in a Real Prison:

Set inside the massive castle-like walls of Eastern State Penitentiary in Philadelphia, the setting for Terror Behind the Walls is creepy in itself.  Eastern State Penitentiary was once the most famous and expensive prison in the world, but stands today in ruin, a lost world of crumbling cellblocks and empty guard towers.  This gothic structure, with soaring 30-foot high fortress walls, is intimidating enough during the day.  At night, the cellblocks fall into darkness, and the building becomes truly terrifying.

Terror Behind the Walls has grown from a single-night event in 1991 to a 29-night event with shows selling out far in advance.  Nearly half of the visitors who attended the event in 2010 traveled to Philadelphia for the event, coming from as far asCalifornia, China and the United Kingdom, making this event a national and international destination for thrill-seekers andHalloween lovers.

An extraordinary theatrical production, Terror Behind the Walls features Hollywood-quality sets, custom-designed props, animatronics, and digital sound effects, all taking place within the walls of the prison.  It takes an elite team of 14 makeup artists almost three hours to prepare the cast of more than 200 performers each evening.

In addition to the nighttime haunted attraction, Eastern State Penitentiary is a National Historic Landmark with a rich history that visitors can experience in the daylight.  Known for its grand architecture and strict discipline, Eastern State Penitentiary opened in 1829 as the world's first true "penitentiary," a prison designed to inspire penitence, or true regret, in the hearts of convicts. Its vaulted, sky-lit cells once held many of America's most notorious criminals, including bank robber "Slick Willie" Sutton and Al Capone. Tours today include the cellblocks, solitary punishment cells, Al Capone's Cell, and Death Row.  Eastern State Penitentiary is open every day year round from 10:00 a.m. to 5:00 p.m. for daytime prison tours. Admission includes "The Voices of Eastern State" Audio Tour narrated by actor Steve Buscemi.  For information on daytime historic tours, please visitwww.EasternState.org or call (215) 236-3300.

Terror Behind the Walls:

Terror Behind the Walls is located inside Eastern State Penitentiary at 22nd Street and Fairmount Avenue in Philadelphia, PA. Tickets for Terror Behind the Walls are available at the penitentiary box office or online at www.EasternState.org/tickets.  Tickets range in price from $10-$15 for kids on family nights, to $20 on weeknights, $25 on Sunday nights, and $30 on Friday and Saturday nights.  Group rates are available by calling (215) 236-5111 x16 or emailing boxoffice@easternstate.org.  For more information, please visit www.TerrorBehindtheWalls.com or call (888) 763-NITE.