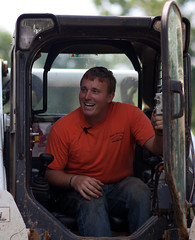 For service as set forth in the following

For conspicuous gallantry and intrepidity at the risk of his life above and beyond the call of duty while serving with Marine Embedded Training Team 2-8, Regional Corps Advisory Command 3-7, in Kunar Province, Afghanistan, on 8

September 2009. Corporal Meyer maintained security at a patrol rally point while other members of his team moved on foot with two platoons of Afghan National Army and Border Police into the village of Ganjgal for a pre-dawn meeting with village elders. Moving into the village, the patrol was ambushed by more than 50 enemy fighters firing rocket propelled grenades, mortars, and machine guns from houses and fortified positions on the slopes above.

Hearing over the radio that four U.S. team members were cut off, Corporal Meyer seized the initiative. With a fellow Marine driving, Corporal Meyer took the exposed gunner’s position in a gun-truck as they drove down the steeply terraced terrain in a daring attempt to disrupt the enemy attack and locate the trapped U.S. team. Disregarding intense enemy fire now concentrated on their lone vehicle, Corporal Meyer killed a number of enemy fighters with the mounted machine guns and his rifle, some at near point blank range, as he and his driver made three solo trips into the ambush area.

During the first two trips, he and his driver evacuated two dozen Afghan soldiers, many of whom were wounded. When one machine gun became inoperable, he directed a return to the rally point to switch to another gun-truck for a third trip into the ambush area where his accurate fire directly supported the remaining U.S. personnel and Afghan soldiers fighting their way out of the ambush.

Despite a shrapnel wound to his arm, Corporal Meyer made two more trips into the ambush area in a third gun-truck accompanied by four other Afghan vehicles to recover more wounded Afghan soldiers and search for the missing U.S. team members. Still under heavy enemy fire, he dismounted the vehicle on the fifth trip and moved on foot to locate and recover the bodies of his team members.

Corporal Meyer’s daring initiative and bold fighting spirit throughout the 6-hour battle significantly disrupted the enemy’s attack and inspired the members of the combined force to fight on. His unwavering courage and steadfast devotion to his U.S. and Afghan comrades in the face of almost certain death reflected great credit upon himself and upheld the highest traditions of the Marine Corps and the United States Naval Service.

For service as set forth in the following

For conspicuous gallantry and intrepidity at the risk of his life above and beyond the call of duty while serving with Marine Embedded Training Team 2-8, Regional Corps Advisory Command 3-7, in Kunar Province, Afghanistan, on 8