The NJDEP Division of Fish and Wildlife will be stocking quail on eleven (11) Dog Training Areas prior to the November 12 opening of the pheasant/quail season. The quail are stocked for dog training purposes only. The dog training areas are located within the following WMAs (listed north to south) and will be stocked for training on October 8, 15, 22 and 29: Whittingham, Pequest, Black River, Clinton, Assunpink, Manasquan, Colliers Mills, Stafford Forge, Glassboro, Millville and Tuckahoe.

All dogs must be properly licensed. Hunters should note that they may exercise or train dogs on any WMA from September 1 to April 30, however, the exercising or training of dogs is prohibited on any WMA on November 11, 2011.

For more information on division dog training areas, including regulations, visit http://www.njfishandwildlife.com/dogtrain.htm on the division's website. 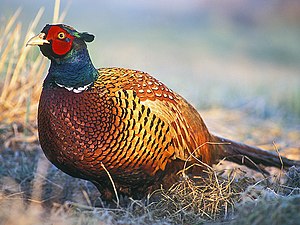 HARRISBURG – Saying there is bad news and good news for the future of pheasant hunting, Pennsylvania Game Commission officials today announced that hunters still should expect to see the agency’s pheasant stocking efforts increase to 200,000 birds for the 2012-12 license year.  However, because of recent flooding impacts at two of the agency’s game farms, hunters will notice a significant reduction in pheasant stockings this year.

“Prior to the flooding from Tropical Storm Lee, Game Commission game farms were on track to have more than 104,000 ring-necked pheasants for release on public lands throughout the Commonwealth for the upcoming small game hunting seasons,” said Carl G. Roe, agency executive director. “Unfortunately, flood waters that wrecked havoc for tens of thousands of Pennsylvanians also destroyed pheasant holding fields at the Loyalsock and Northcentral game farms in Lycoming County.

“Initial reports showed about 40,000 birds either perished in flood waters or escaped when the netting and fencing providing containment for holding fields were swept away.  Game Farm employees have been working diligently to round up the birds that escaped; we have recaptured more than 10,000 birds and may be able to recapture a few hundred more by the time our stocking trucks roll out for State Game Lands and other lands open to public hunting.”

Roe noted the agency’s other two game farms – the Western Game Farm in Crawford County and the Southwestern Game Farm in Armstrong County – were not impacted by flood waters.  Combined with the birds unaffected by the flood and recaptured around the two Lycoming County game farms, the agency has reduced pheasant allocations across the state by an equal share – about 30 percent.

Based on the present figures, the minimum number of birds to be stocked this year will be 73,390 pheasants, including 11,510 birds for the junior-only season (Oct. 8-15).  Roe stressed that this across-the-board reduction will not impact the 1,800 pheasants allocated for those clubs sponsoring mentored pheasant hunts for juniors on Oct. 8, but plans to stock pheasants for the late season (Dec. 26-Feb. 4) have been cancelled.

“We regret not being able to stock pheasants for the popular late season, but the large number of hens lost at the Loyalsock farm, coupled with the need for an increased number of hens for full production for next year, left us no choice” Roe said. “Counties that were to receive hens during the late season have been allocated an equal number of roosters during the earlier releases.”

The pheasant stockings will begin Oct. 7, when the agency will release 11,510 birds (6,880 males and 4,630 females) for the junior pheasant hunt scheduled for Oct. 8-15.  A listing of stocking locations for the youth hunt can be found on pages 25-27 of the 2011-12 Pennsylvania Digest of Hunting and Trapping Regulations, which is provided to each license buyer.

Roe noted that, based on agency budget cuts first implemented in the 2004-05 fiscal year and carried forward since, pheasant propagation production levels were reduced by 50 percent to 100,000 birds.  Reducing the pheasant propagation program saved the agency more than $500,000 annually.  However, thanks to monies from recent Marcellus Shale-related gas leases on State Game Lands, the agency announced its plans to return to the 200,000-bird level for the 2012-13 seasons, which is consistent with the Game Commission’s Strategic Plan and Pheasant Management Plan.

“From the first photos that we began to receive of the damages at the two Lycoming County game farms, we were concerned about our pledge to increase pheasant production to 200,000 birds for the 2012 seasons,” Roe said.  “However, despite the loss of birds and damage to holding pens, we suffered no significant impacts to our core infrastructure.

“Hatcheries, brooder houses, barns, workshops, farm equipment and waterlines in the fields were relatively untouched.  We will retain a sufficient number of hen pheasants to serve as a breeder flock to enable us to reach the 200,000 pheasant hunting season release level next year.”

Opening day of the general pheasant hunting season is Oct. 22, and closes on Nov. 26.  Pre-season stocking of pheasants in each region will begin Oct. 19, followed by the first and second in-season stockings on Oct. 27 or 28, and Nov. 3 and 4. Third in-season stocking will be conducted on Nov. 10 in areas surrounding the Somerset, Central Susquehanna, Hegins-Gratz Valley and Franklin County Wild Pheasant Recovery Areas.  Only male pheasants are legal game in Wildlife Management Units (WMUs) 2A, 2B, 2C, 4C, 4E, 5A and 5B.  Male and female pheasants are legal game in all other WMUs.

During the regular fall season, the agency focuses pheasant stocking on State Game Lands and select state parks and federal lands.  However, in some areas where habitat conditions on public lands are marginal, birds may be stocked on properties enrolled in the Game Commission public access program. The Game Commission has an updated publication titled “Pheasant Management Program,” which identifies State Game Lands, and those state parks and federal lands with suitable habitat that receive pheasant stockings.  This publication can be found on the Game Commission’s website (www.pgc.state.pa.us), and can be viewed by putting your cursor over “Hunt/Trap” in the menu bar at the top of the page, clicking on “Hunting,” clicking on “Pheasant” in the “Small Game” listing and then choosing “Pheasant Management Program” in the “Programs” listing.

As part of the agency’s Ring-necked Pheasant Management Plan, the Game Commission is taking steps to restore self-sustaining and huntable populations of wild pheasants in suitable habitats called “Wild Pheasant Recovery Areas” (WPRAs). For the 2011-12 seasons, WPRAs are defined as the Pike Run, Somerset, Central Susquehanna, Hegins-Gratz Valley and Franklin County WPRAs.   (The Franklin WPRA wasn’t included in the 2011-12 Digest as it was approved after the digest went to print.) The agency is facilitating the release of wild-trapped pheasants into these areas, with a goal of achieving a density of 10 hen pheasants per square mile.

The NJDEP Division of Fish and Wildlife will be stocking quail on eleven (11) Dog Training Areas prior to the November 12 opening of the pheasant/quail season. The quail are stocked for dog training purposes only. The dog training areas are located within the following WMAs (listed north to south) and will be stocked for training on October 8, 15, 22 and 29: Whittingham, Pequest, Black River, Clinton, Assunpink, Manasquan, Colliers Mills, Stafford Forge, Glassboro, Millville and Tuckahoe.