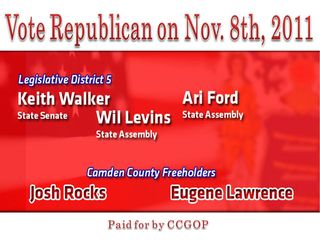 “It boggles the mind that the Democrats would again put up conflicted candidates in the wake of Lyons resignation for ethical misconduct,” commented Washington Township GOP Chairman Michael Pascetta. “Their arrogance knows no bounds and proves that they put their self serving interests ahead of resident’s interests.”

“The selection of these candidates is a mockery of the political process put in place by New Jersey Statutes to deal with the circumstance of a mayor’s resignation,” said Councilman Giancarlo D’Orazio. “The residents of Washington Township deserve a viable un-conflicted mayor, even though it’s for only a short time.

According to the Gloucester County Times article on August 3, Councilman D’Orazio requested to see the resumes for the three nominees as part of the vetting process, however Jill McCrea stated that she refuses to provide them.

The interim mayor is to serve the residents of Washington Township for about 10 weeks, after which a new more permanent mayor will be sworn in after a special election on November 8 of this year.