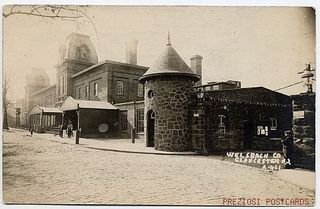 Postcard showing the outside of the former Welsback factory, King and Essex Sts.

The Welsbach Company and the General Gas Mantle Company used the radioactive material thorium from the late 1890s to 1941 to make the gas lamps manufactured at the facilities glow brighter. It is believed that thorium-contaminated waste from the manufacturing process was used as fill in the surrounding area. As a result, the soil and buildings on the Welsbach and General Gas Mantle properties, as well as surrounding properties, were contaminated. EPA is encouraging public comments on the proposed cleanup plan until August 22, 2011 and will discuss its proposed plan at a public meeting on August 3 at 7:00 pm at Gloucester City Courthouse at City Hall, 313 Monmouth Street, Gloucester City, N.J.

“EPA has invested more than $200 million in the cleanup of the Welsbach and General Gas Mantle facilities and surrounding properties to ensure that the health of people who live nearby is protected,” said EPA Regional Administrator Judith A. Enck. “We encourage community residents to give us feedback on our proposed plan to clean up the last remaining legacy of radioactive contamination on the Welsbach property.”

EPA added the Welsbach/General Gas Mantle site to the federal Superfund list in 1996. Because of the nature, size and complexity of the site, EPA divided the investigation and cleanup into multiple phases. In 1999, EPA selected a plan for the first phase of the cleanup, which included the excavation and off-site disposal of radiologically contaminated soil and building materials, and backfilling of the areas with clean soil. To date, EPA has removed more than 200,000 cubic yards of radiologically contaminated soil and building materials from more than 90 properties in the Gloucester City and Camden areas and has investigated more than 900 properties.

The plan announced today addresses the Armstrong Building, the last remaining building from Welsbach’s former operations. The three-story building, located at Ellis and Essex Streets in Gloucester City, is still used by a local company. The property includes an active port, warehouse and logistics facility. The building consists of six connected buildings containing approximately 200,000 square feet of floor space. EPA is proposing to decontaminate building surfaces and properly dispose of the contaminated waste at an approved off-site facility. EPA will conduct environmental monitoring to ensure the effectiveness of the cleanup, which is estimated to cost $3.5 million.

The EPA has a web page on the site at: http://www.epa.gov/region2/superfund/npl/welsbach.

Postcard showing the outside of the former Welsback factory, King and Essex Sts.