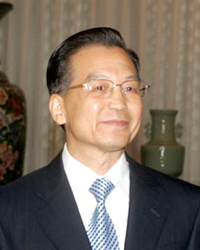 A fatal crash on China's high-speed train network could scuttle Beijing's ambitions to sell the technology overseas and could also hit its existing rail exports.Shares in Chinese rail and train builders have fallen sharply since the accident,which killed at least 39 people and injured 200, and raised questions as to the passengers who are still missing after the crash.

Initial reports blamed Saturday's collision on a lightning strike that knocked out power to the first train, which was rammed from behind by a second express, crushing some cars and shunting others off the viaduct.

Chinese railway officials are now blaming design flaws in signaling equipment for the crash, the official Xinhua news agency said Thursday. The system "failed to turn the green light into red"after being struck by lightning, Xinhua quoted An Lusheng , head of the Shanghai Railway Bureau,as saying during a meeting on the investigation into Sunday's accident.

Premier Wen Jiabao (photo)on Wednesday called for an investigation,and authorities have ordered an "urgent overhaul"of the national rail network.Wednesday's announcement indicated the government may be trying to assuage mounting public fury over the crash,the Chinese company that designed the signaling equipment apologized Thursday.

Some families of those killed are refusing compensation until the cause of the accident is made clear, I saw on TV on Thursday,reflecting public anger with official handling of the situation.

Families were quoted by the state-run China Daily as saying government officials were trying to hurry them into accepting compensation offers,but many relatives were refusing, saying it was too early to discuss such payments."We don't need money.We demand the truth," one family member, Wang Hui  was quoted as saying.

This incident has badly shaken public faith in the rail system, especially the high-speed network,which has been plagued by corruption allegations and repeated delays due to power shortages.

"There are already concerns overseas about the quality of some this technology," said Alistair Thornton. A senior analyst at research group IHS Global Insight."I think this will make it very difficult for policymakers in the West to rely on China as a source in the future.

Last December,train builder China South Locomotive and Rolling Stock corp.(CSR) signed an agreement with U.S. conglomerate General Electric to make high-speed trains in the United States.But Atlantis Investment Research President Edwin Merner said China had "zero" chance in the next five to 10 years of exporting its high-speed trains and equipment-even if it was originally based on Western technology."I think people would say,'your trains are unreliable and therefore your systems are not preferred so we don't want them," Tokyo-based Merner said. "It just reconfirms that if you try to go too fast and if you talk big,then probably something is wrong."

"The accident does not mean the end of high-speed,but it will force other countries to think more about whether they really need it and where they get those technologies,"Ingrid Wei an analyst at Credit Suisse commented on TV.The companies behind China's rail network gained the right to use rail technology when they bought equipment from Western firms.This disaster has exposed key flaws in China's railway system and could take many years for local train and rail builders to convince foreign buyers that their high-speed technology was safe."The construction-even if the designs are very good-depends on very reliable parts and Chinese parts technology leaves something to be wondered about"in the future.

China has many other serious problems to mend or fix not just the rail system,but construction practices and planning methods, material etc.also seems to be faulty as well as the general workmanship practices on many projects that are also lacking as well.

Note: Hank  is a former resident of Gloucester City who resides in Kitakyushu City, Japan. category WHEN EAST MEETS WEST

A fatal crash on China's high-speed train network could scuttle Beijing's ambitions to sell the technology overseas and could also hit its existing rail exports.Shares in Chinese rail and train builders have fallen sharply since the accident,which killed at least 39 people and injured 200, and raised questions as to the passengers who are still missing after the crash.