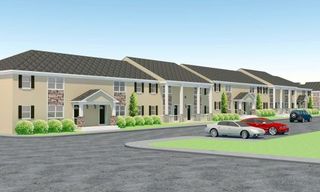 Thanks to the efforts of the Orens Brothers transforming the Chatham Square Apartments into three bedroom homes, the housing stock in Gloucester City has improved.

Meadowbrook Mews, at Route 130 near Klemm Avenue, is offering new townhomes with everything brand new and a five-year, graded tax abatement program.

Units are now being sold in the first building facing Klemm, and ultimately 100 apartments are being upgraded and renovated into 50 homes with a price range of $167,000 to $195,000, said Jon Orens of Oren Bros. Real Estate Inc., based in Center City Philadelphia.

“Gloucester City is reclaiming this property,” said Orens, referring to the deteriorating condition of Chatham Square by the late 2000s.

“Meadowbrook Mews will bring a ratable base to Gloucester City, and alleviate problems like drug use and prostitution that existed previously at the apartments,” City Administrator Jack Lipsett said.

The townhouses range from 1,700 to 2,000 square feet, and everything is all new, said Project Manager Matt Barrabee said, adding that units can be upgraded from 1 ½ bathrooms to 2 ½ bathrooms.

In 1979, Sylvan Orens, a dentist, gave Jon and his brothers $40,000 to purchase and renovate their first property in University City, Philadelphia.

“That property was the seed to our business,” Jon said.  “We still have it as part of our investment portfolio. One of our mottos is ‘Scar to a Star,’ which absolutely grasps the essence of what is happening here at Meadowbrook Mews.”

City Councilman Jon Hutchinson said the am-ount of police calls, plus the strain on the school system by Chatham Square put a strain on Gloucester City.

“Besides being a great improvement, this project is going to help establish a tax base,” he said.

Councilman Nick Marchese, who had overseen the City’s purchase of Chatham Square after the owners were taken to court because of the deterioration of the complex, is delighted.

“If the citizens of Gloucester City take a tour of the new Meadowbrook Mews townhomes on Route 130, they will be pleasantly surprised,” he wrote in a letter to the Gloucester City News.

“The three bedroom one and a half baths units have been totally gutted and new plumbing, electrical, HV-AC, doors, windows, framing, insulation, interior walls and much more have been installed. The units have large floor plans with very spacious room sizes.

“Stucco has been applied over the brick exterior making them much better than a new home. The new entrance into the complex off Meadowbrook Lane really gives you a different perspective of the entire area and the landscaping court yard is very appealing. There will be a reasonable homeowners association so grass cutting and watering, and snow removal will be completed by others,” Marchese wrote.

“Mayor and Council have taken huge steps to turn this past project into a family community. We are proud of this challenge even with the criticism we have received. Decisions like this don’t come easy and are not taken lightly.

“It wasn’t so long ago that the crime rate there was inexcusable. It got to the point you couldn’t even deliver a pizza without a police escort, and now all of that has changed. Previous administrations avoided this problem; we continue to work towards solving it.

“With the new single family homes in the rear of the complex, these units will keep their value as well as increase the existing neighborhood’s values. It is my hope that the residents of Gloucester will bring their family and friends to see the homes to become new Gloucester City homeowners.

“They are a great value, and the tax breaks the buyers will receive are unmatched by any other new homes. New homeowners will move in paying property tax on only the land value for the first year, (around $ 900.) The next five years they will pay an additional 20 percent each year of the home value.

“It is important to remember that all of the taxpayers in Gloucester own these homes. When they are sold it will only help the taxpayers, while improving our City and the incoming citizens.

“We want families in this new community to get involved in the City and to be a part of the positive changes that we all can enjoy. Please help all of Gloucester be successful in our endeavors to sell these homes and to improve our city, our tax base, and our community,” Marchese concluded.

To take a tour of one of the new townhouses at Meadowbrook Mews, call 1-888-888-1551 or log on to the website at www.meadowbrookmews.com.

Chatham Square to be Known as Meadow Mews

By CNBNews.net GLOUCESTER CITY NJ- Orens Brothers of Philadelphia, the contractor hired to rehab the Chatham Square Apartments at Rt. 130 and Klemm Avenue began working on the project last week. The City, in conjunction with Oren...

Email this • Technorati Links • Digg This!

Gloucester City Councilman Nick Marchese, (photo) Second Ward (D) released the following report on the construction projects that are taking place in the City of Gloucester City. His statement reads as follows: “We are happy to ...

Email this • Technorati Links • Digg This!

Thanks to the efforts of the Orens Brothers transforming the Chatham Square Apartments into three bedroom homes, the housing stock in Gloucester City has improved.

Meadowbrook Mews, at Route 130 near Klemm Avenue, is offering new townhomes with everything brand new and a five-year, graded tax abatement program.