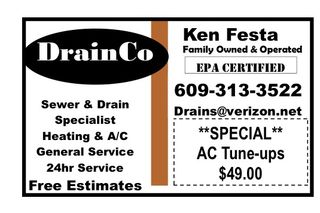 "The invasive southern pine beetle is a major threat to our unique Pinelands region," said Commissioner Martin. "We need residents and private owners of forest lands to help us look out for this pest and report any infestations. With early detection, foresters and tree experts can help greatly limit the damage."

DEP will begin control activities on State lands this week through the directional felling of infested trees. This involves cutting trees, dropping them in the direction of the infestation outbreak's origin, and leaving them on the ground. The horizontal position of the trees disorients the larvae and beetles, which prevents them from spreading to new trees and infesting them.

Foresters also will leave up a portion of standing dead trees that no longer house the beetle to provide habitat for checkered beetles and woodpeckers, two southern pine beetle predators.

The DEP will work in coordination with the New Jersey Pinelands Commission on this infestation suppression effort, said Fleming.

The DEP is in the process of conducting scientific surveys using special traps to gauge just how bad the infestation will be this year. While results are not in yet, Fleming said state foresters are already observing damage from infestation, leading to concerns that this year's infestation will be as bad as or even worse than last year's.

The southern pine beetle has been a problem for many years in states in the Southeastern United States, and was first detected in New Jersey in 2001. It tends to prefer warmer climates. Very cold winters tend to keep numbers lower.

Last summer's record high temperatures coupled with drought put stress on the trees and advanced beetle outbreaks. To determine the extent of the infestations, foresters surveyed the entire southern region using a combination of traps, on-site observations and aerial surveys.

The survey estimated that southern pine beetle (also known as Dendroctonus frontalis) affected a record 14,100 acres in 2010. Since 2001, the beetle has affected 26,000 acres of southern New Jersey pine forests, or about 6 percent of the total pine component.

Foresters have identified infested pine stands in Atlantic, Cape May, and Cumberland counties, which also have been affected in past years. However, this year's outbreak has spread as far north as upper Ocean County, which was previously unaffected, and could potentially reach forests in nine counties.

Southern pine beetle adults bore into a tree's bark, and lay eggs within S-shaped galleries they create. As the beetles create their egg galleries, they chew up the cambial layer of the tree, which cuts off the tree's supply of water and nutrients. The eggs hatch into larvae which also feed on the cambial layer.

An infested tree's needles will rapidly turn from green to yellow to brown, in as little as two weeks following initial attack. Newly attacked trees also may have soft, popcorn-sized, yellow-white sap pitch tubes found on the tree trunk. The southern pine beetle prefers pitch pine, but will attack most pine species. The pitch pine is the predominant species in the New Jersey Pinelands.

The beetles can over-winter in any life stage: egg, larval, pupal, or adult, and produce three to seven generations a year. In New Jersey, the northern-most range of southern pine beetle, beetles usually overwinter in the pupal stage and produce around two generations per year.

Once adult beetles exit a host tree they fly, sometimes several miles, to a new tree. The beetles can have several broods over the course of a year.

Planned forest management can reduce the risk from infestations, but once the southern pine beetle attacks, foresters must remove the affected trees before the infestation spreads.

Fleming stressed the importance of private land owners taking action to identify and take steps similar to those being done on state lands to prevent the spread of the beetles.

"We need everyone's help in trying to keep this pest under control as much as possible," Fleming said.

Landowners enrolled in the New Jersey Forest Stewardship Program or the Farmland Assessment Program should contact a state forester or their consulting forester to learn about possible control assistance opportunities. Landowners not enrolled in these programs that have five acres or more of woodland can contact the New Jersey Forest Service or a consulting forester to enroll.