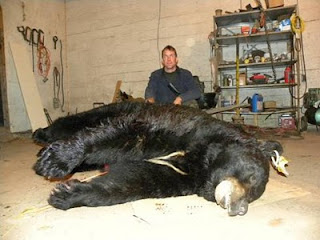 Shot November 15th  with a crossbow in northeastern Pennsylvania (Pike County) by David Price of Barrett Township, Monroe County. 875 pounds live weight and 744 dressed, #2 in the WORLD and a new PA State Record. He missed the world record by 4 pounds......

From the hunter's nephew:
" It has been caught in NJ numerous times which means he isn't afraid to swim the Delaware River. 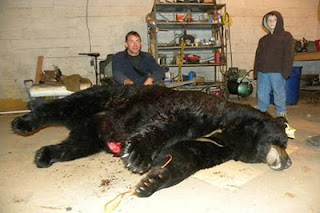 He was trying to mate with a female bear who was in a snare in NJ. The female was caught by the NJDEP for testing and the big boy was trying to get his groove on with her. They had to tranquilize him so he didn't injure the female. As you can see in the pics, he has a tattoo on his lip. He was 711 pounds last year when he was caught by the Game Commission...so he put on some weight since then. He has an AWESOME blaze on his chest.

When Bozo was shot by a hunter Monday, he weighed nearly 900 pounds. That made Bozo the largest black bear ever killed in Pennsylvania.

A trophy for David Price, the hunter, the kill was a heartbreak for Lewis.

"I'm devastated. I'm just devastated," he said Friday. "I mean I feel like I lost a friend. He used to come knock on the door when he was hungry."

Price shot the bear with a crossbow on the opening day of Pennsylvania's new archery season for bear hunting. The game commission says Price followed the law when he bagged the giant bear.

Price killed the bear near Lewis' trailer, which sits between Fernwood Resort and the border of the Delaware Water Gap National Recreation Area. Lewis said he started feeding the bear when it was maybe 2 years old.

"He was just so friendly that I felt like feeding him," he said. "I never felt like I did anything wrong."

The game commission, in fact, thought Lewis was doing wrong by feeding the bear. It cited him in October for feeding wildlife. 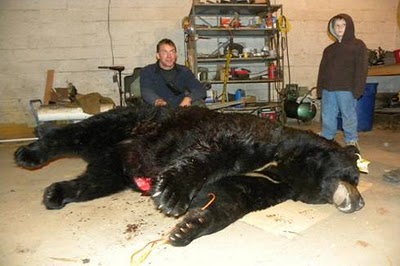 Let's all point the finger at David Price, the hunter from Cresco who killed a so-called tame bear, and call him the bad guy.

He's the guy who's wrong for killing Bozo, the record 875-pound black bear near Fernwood Resort on Monday afternoon.

He's the guy who knew there was an innocent, overweight bear walking the woods of Pike County.

He's the guy who "» did absolutely nothing wrong.

That's right, Price did nothing wrong when he, three brothers, a cousin and friend eventually tracked and killed what the Pennsylvania Game Commission is calling the largest weighing bear on record.

Shot November 15th  with a crossbow in northeastern Pennsylvania (Pike County) by David Price of Barrett Township, Monroe County. 875 pounds live weight and 744 dressed, #2 in the WORLD and a new PA State Record. He missed the world record by 4 pounds......