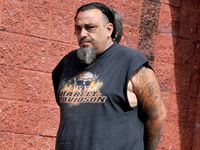 As alleged in the 31-count indictment unsealed in Central Islip and a detention letter filed by the government:

Five of the indicted defendants, John Ebeling, Jason Blair, Ezra Arthur Davis III, Kenneth Van Diver, and Edward Samborski, are members of the Long Island chapter of the Pagans. Ebeling previously served as president of the Long Island chapter and most recently as an official in the Pagans national governing body, known as the “Mother Club,” which oversees the activities of several gang chapters in New York, New Jersey, and eastern Pennsylvania. In May 2010, Blair succeeded Ebeling as the Long Island chapter president. Both defendants, together with Tracy Lahey, Douglas Yeomans, Timothy Fowler, and Derek Dekker – ranking members of Pagans chapters based in Sullivan County, New York, and Trenton, New Jersey – are charged with conspiring to murder members and associates of the Hell’s Angels, a rival motorcycle gang. The conspiracy is part of a long-standing feud between the two motorcycle gangs. During the course of the investigation, undercover agents learned that the defendants discussed using grenades to kill members of the Hell’s Angels and their support clubs and had drawn up a list of possible targets. On or about September 12, 2010, at a New Jersey gathering of Pagans, Blair ordered members of the Long Island chapter to be prepared to die or go to prison as they executed the conspiracy to murder.

Violent Crimes in Aid of Racketeering

Ebeling, Blair, Dekker, Fowler, and Robert Hamilton, as well as Long Island chapter members Davis and Van Diver are charged with a series of violent crimes in aid of racketeering – including assaults with axe handles, boots, billiard balls, and a pipe wrench – against four victims between October 2009 and January 2010. Ebeling and Blair are also charged with conspiracy to commit extortion against a fifth victim and with the interstate sale of that victim’s stolen motorcycle.

Samborski, Van Diver, and Lahey, as well as Elizabeth, New Jersey, Pagans chapter members Robert Leonardis and Robert Deronde, are charged with the distribution of various drugs, including cocaine, cocaine base, oxycodone, and methamphetamine.

Ebeling, Blair, Lahey, Davis, and Van Diver are charged with possession of firearms in connection with murder conspiracy, assaults, or drug distribution. Davis is also charged with the illegal possession of a home-made hand grenade.

As alleged in the 12-count indictment unsealed in White Plains federal court:

From at least in or about August 2009 through in or about late August 2010, Tracy Lahey, Douglas Youmans, also known as “Doc,” Robert Santiago, also known as “Comanche,” Ezra Arthur Davis III, also known as “Izzo,” Walter Tarrats, and Harold Legg, also known as “Wiz,” and others known and unknown, participated in a conspiracy to distribute and possess with intent to distribute cocaine, and used, carried, and possessed firearms in furtherance of their drug trafficking. Lahey, Youmans, and Santiago are also charged with distributing cocaine and possessing cocaine with the intent to distribute it on or about May 22, 2010 in Swan Lake, New York. The indictment further charges Youmans, Cuevas, and Tarrats with being felons in possession of firearms, and charges Davis III, Tarrats, and Legg with possessing firearms while being employed by convicted felons and drug users.

“As this case demonstrates, violent street gangs do not limit their criminal activities to our inner cities and urban areas,” stated United States Attorney Lynch. “Investigating and prosecuting those gangs is a priority program of this office, wherever they might be located.” Ms. Lynch expressed her grateful appreciation to the United States Attorney’s Office, District of Massachusetts, for its cooperation and assistance in the investigation. Ms. Lynch extended her grateful appreciation to the United States Attorney’s Office for the Southern District of New York and the many state and local law enforcement agencies that assisted in the investigation and added that the government’s investigation is continuing.

United States Attorney Bharara stated, “As this case suggests, violent and criminal motorcycle gangs are not quaint vestiges of the past. Some of the defendants allegedly plied their criminal trade not in the inner city but in quiet communities like the Catskills. I especially applaud the work of the United States Attorney’s Office for the Eastern District of New York. Today’s Indictments stand as a tribute to the cooperative efforts of law enforcement at all levels.”

ATF Special Agent-in-Charge Turk stated, “Today’s arrests affirm ATF’s commitment to making our neighborhoods safer. Targeting and arresting armed violent criminals remains one of our top priorities and we, along with our partners, will continue this fight. We have targeted several out-of-state firearms, explosives, and narcotics suppliers of this outlaw motorcycle gang and will continue to combat all of these illegal activities. I would also like to express my sincere appreciation to the ATF undercover special agents who gained access to the Pagans inner circles. By doing this, they put their lives on hold and at risk to ensure a complete and thorough investigation.”

1 The charges announced today are merely allegations, and the defendants are presumed innocent unless and until proven guilty.