The NJ DEP Division of Fish and Wildlife will be stocking quail on eleven (11) Dog Training Areas prior to the November 6 opening of the small game season. The quail are stocked for dog training purposes only. 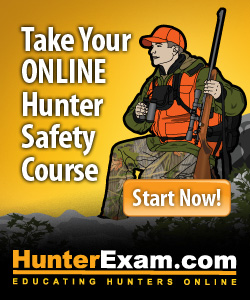 The dog training areas are located within the following WMAs (listed north to south) and will be stocked the afternoons of October 1, 8, 15 and 22: Whittingham, Pequest, Black River, Clinton, Assunpink, Manasquan, Colliers Mills, Stafford Forge, Glassboro, Millville and Tuckahoe.

All dogs must be properly licensed. Hunters should note that they may exercise or train dogs on any WMA from September 1 to April 30, however, the exercising or training of dogs is prohibited on any WMA on November 5, 2010.

For more information on division dog training areas, including regulations,

BLACK BEARS ON THE HUNT FOR FOOD; DON'T FEED THEM

(10/P101) TRENTON --- New Jersey's black bears are starting to fatten up for winter hibernation and will more actively forage for food in the coming weeks. So, state residents, especially those living in bear country, are reminded by DEP fish and wildlife biologists to remove food sources from around their homes to prevent difficult encounters with bears this fall.

By taking simple precautions, such as properly securing trash and limiting sources of food, such as birdseed and pet food left on decks and patios, you can make a major difference in reducing the risk of bad encounters with black bears.

"If you live in areas frequented by bears, try to ensure they will not find food near your homes,'' said Commissioner Bob Martin. "Bears will naturally take advantage of easy meals by searching through unsecured garbage cans and dumpsters, or raiding birdfeeders. This can lead to problems for the bears and the community."

In New Jersey, it's illegal to feed black bears, and violators face a penalty of up to $1,000 for each offense.

But even unintentional feeding, by leaving out trash or other food sources, can have serious consequences for residents living in bear country, and also for the bears.

Black bears will take advantage of an easy meal and often return to an area where they find food around people's homes, said DEP Division of Fish and Wildlife Assistant Director Larry Herrighty. Bears that learn to associate food with people can become a nuisance, are more likely to damage property or exhibit aggression, and may have to be destroyed to protect the public.

A majority of New Jersey's rising black bear population lives in the northwestern portion of the state, but sightings have been reported in all 21 counties, with increased sightings in more urban areas in recent months. But the mere presence of a black bear in residential areas is not considered a problem, if a bear is exhibiting normal behavior.

The DEP offers the following tips to avoid conflicts with bears:

Residents who encounter a bear should remain calm. Do not block a bear's potential escape routes. Do not run. Do not feed the bear. Avoid direct eye contact, back up slowly and speak with a low, assertive voice.

Residents living in areas frequented by bears are also advised to take the following precautions to minimize bear encounters:

* Use certified bear-resistant garbage containers.  They offer the best protection.  Otherwise, store all garbage in containers with tight-fitting lids and place them within a secure location, where bears are unlikely to see or smell them.

* Put out garbage on collection day, not the night before.

* If you choose to feed birds, do so during daylight hours only, between December 1 and April 1, when bears are least active.  Suspend the birdfeeder from a free-hanging wire, making sure it's at least 10 feet off the ground and away from the trunk of a tree. Bring the feeder indoors at night. Clean up spilled seeds and shells daily.

* Clean up after pets.  If you must feed them outside, immediately pick up any leftover food and remove the food bowls after they have finished.

* Clean outdoor grills and utensils thoroughly after each use and store grills securely.  Grease and food residue can attract bears.

* Do not place meat, dairy or any sweet foods in compost piles.

* Residents who have fruit or nut trees on their property should recognize that bears may be attracted to any residual fruit or nuts left on the ground. Removing fallen fruit or nuts will minimize bear activity in your yard.

* Properly installed electric fencing is an effective and efficient way of protecting crops, beehives and livestock.

* Report bear damage, nuisance behavior or aggressive bears to the local police department and to the DEP's hotline at (877) WARN DEP.

The New Jersey Comprehensive Black Bear Management Policy developed by the state's Fish and Game Council and approved by Commissioner Martin emphasizes managing black bears through research and monitoring, non-lethal and lethal control of problem bears, public education on co-existing with bears, law enforcement to reduce conflicts between bears and people, and a controlled hunt.

In addition to brochures and other information about living with black bears, the DEP provides free bear education seminars to schools and civic groups.

Youth hunters with a valid youth hunting license will have their own special day to harvest a deer on September 25 as part of the Division of Fish and Wildlife's popular Take a Kid Hunting Program. This hunt is an extension of the fall bow season so no special season deer permit is required, and youth hunters may also harvest one antlered deer during the fall bow season. Antler point restrictions do not apply on these days for the youth hunter.

Youth may hunt statewide for one deer of either sex on this day. They MUST be under the direct supervision of a person who is at least 21 years old and who has a valid bow and arrow license. Direct supervision is defined as both the youth hunter and parent/guardian set up together at the same location, hunting as a unit, not hunting independently. The adult CANNOT hunt or possess a bow. The adult may grunt, call or rattle for the youth.

Youth hunters and mentors should be aware that the bow hunting safety zone distance was reduced from 450 feet to 150 feet by the Bowhunting Safety Zone Perimeter Bill. The owner or lessee of a building-and persons specifically authorized by the owner or lessee in writing (written permission must be in possession while hunting)-may hunt within 150 feet of the building. Persons authorized to hunt within 150 feet of a building must hunt from an elevated position to shoot down toward the ground. Shooting into a safety zone is prohibited.

Successful youth hunters must tag their deer with a homemade transportation tag, or cut out the deer transportation tag provided on page 33 of the 2010 Hunting and Trapping Issue of the NJ Fish and Wildlife Digest. The tag must include the youth's hunting license number or Conservation ID number, sex of deer, number of antler points, date, zone, county and township from which the deer was taken, and must say "Taken during the Bow Youth Hunt." No supplemental tags are issued when Youth Hunt deer are checked.

Extensive information regarding deer hunting in New Jersey can be found in the August 2010 Hunting and Trapping Issue of the New Jersey Fish and Wildlife Digest, or on the Fish and Wildlife Web site at:http://www.njfishandwildlife.com/deer.htm.  All hunters should be completely familiar with the rules and regulations pertaining to the areas they wish to hunt.

HARRISBURG - Pennsylvania Game Commission Wildlife Conservation Officers (WCOs), Land Management Group Supervisors (LMGSs) and foresters spend a considerable amount of time gathering information about wildlife population trends in their districts.  With the hunting and trapping seasons just around the corner, the Game Commission, once again, is sharing that information – through its website – with those who enjoy Penn’s Woods.

To view these field forecasts offered by Game Commission officers, go to the agency’s website (www.pgc.state.pa.us) and click on the “Field Officer Forecasts” photo link in the middle of the homepage, then select the region of interest in the map, and choose the WCO district of interest from the map.  For LMGS or forester reports, select the link to the LMGS Group or forester link of interest within that region.

“Our field officers and foresters provide wildlife forecasts for small game, furbearers, wild turkey, bear and deer within their respective districts,” said Carl G. Roe, Game Commission executive director.  “These forecasts are based on sightings field officers have had in the months leading up to the 2010-11 seasons, and some offer comparisons to previous wildlife forecasts. Some WCOs and LMGSs include anecdotal information, as well as hunting and trapping leads in their districts.

“The Game Commission offers this information to hunters and trappers to help them in making plans for the upcoming seasons. Many WCO, LMGS and forester reports offer information on where to hunt or trap within their districts, as well as guidance on where to get more information, particularly for trapping certain furbearers, such as beaver and coyotes.”

Roe noted the Game Commission divides the state’s 67 counties into six regions, and then each region is divided into WCO districts comprised of about 300 square miles each.  There are 136 WCO districts statewide.  Each of the 29 LMGS groups is comprised of a number of counties or portions of counties within each region, and seeks to equally distribute the amount of State Game Lands and public access lands within the region.  The number of foresters ranges per region, from four to nine.

The NJ DEP Division of Fish and Wildlife will be stocking quail on eleven (11) Dog Training Areas prior to the November 6 opening of the small game season. The quail are stocked for dog training purposes only.

The dog training areas are located within the following WMAs (listed north to south) and will be stocked the afternoons of October 1, 8, 15 and 22: Whittingham, Pequest, Black River, Clinton, Assunpink, Manasquan, Colliers Mills, Stafford Forge, Glassboro, Millville and Tuckahoe.

All dogs must be properly licensed. Hunters should note that they may exercise or train dogs on any WMA from September 1 to April 30, however, the exercising or training of dogs is prohibited on any WMA on November 5, 2010.

For more information on division dog training areas, including regulations,