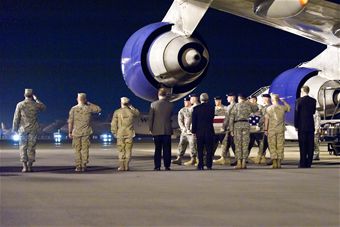 A dignified transfer at Dover Air Force Base, Dover, Delaware

As a laborer in this casualty vineyard, you can't help but have images of grief and death come tripping through your mind in stocking feet.

Seeing the dead and their families is a reality for me. To compensate and change your brain when that offered day off comes, you find a diversion away from the base.

Within a two-hour drive from Dover AFB, everywhere you go there is a historical site from the Revolutionary or Civil wars.

If the church sign out front says "first" in its title, it may have really been the very first Lutheran, Methodist, Presbyterian, Quaker or other church in the original colonies. The first great thoughts and spoken words of our democracy are littered on every corner of the combined states of Delaware, Maryland, Pennsylvania and Virginia.

After my lunch at the City Tavern, I saw the masts of a tall ship on the waterfront. It was time to keep exploring history by foot. In my walk to the pier, I found the Korean War memorial.

A wonderful series of dark panels with pictures of the war etched into its marble. As I came to the site facing the river, there was an old man wearing a Korean War veteran ball cap. He was alone and in tears. This is where the chaplain, instead of the historian, took over.

I inquired of my tear-filled soldier: "You were there weren't you."

My vet nodded and pointed to the carved letters on the marble that read: "7th Infantry."

I heard of the Battle of Inchon, and how he had been wounded. I listened deeply as he told me of holding a comrade who was dying as they were surrounded by the Chinese. Again he was wounded, but had escaped capture with the others from his unit.

He looked up at me and said, "My brother fought in World War II and told me I would never get it out of my head, and he was right."

I saw the dead comrades he told me about in my mind, for I had just seen them recently in body bags from Afghanistan and Iraq. He looked at my head and eyeballed my recent haircut.

"You're military, you understand, don't you?" he said.

I nodded, and told him I was a deployed chaplain at Dover AFB's mortuary.

Like a child wanting a hug, his arms reached out, and we held onto one another, reaching across the decades. Two wars, memories dropping like falling leaves building a foundation of understanding and healing.

To place my story into a simple theology, even when we are not expecting it, God places us where we are needed.

We can embrace the moment and find the holy in stories, and care for one another, or we can walk on, to the waterfront where stuff just floats by. The joy of finding the holy moment when we are sent is that we don't forget the real sacrifice.

A dignified transfer at Dover Air Force Base, Dover, Delaware