Police Chief: There Was No Fight Between Pagans and Warlocks

GLOUCESTER CITY NJ-Hearing several rumors over the past few days about a suppose brawl recently between members of the Pagans and the Warlocks motorcycle gangs in Gloucester City we asked Gloucester City Police Chief George Berglund for some answers.

The Pagan’s motorcycle club established a local chapter in Gloucester City several years ago.  Several of our citizens have decided to join this chapter for unknown reasons.  There was an incident that happened inside of Jacks bar on Friday night, (June 4) where several members of the Warlocks showed up as well as the Pagan’s motorcycle club.  There was no fight or loud words exchanged.  (Reporter’s emphasis)

“We decided to call in mutual aid to help disperse both groups of bikers.  Both groups were dispersed without incident.  There were no arrests because there were no witnesses or complainants that came forward.”

CNBNews readers have been commenting about the incident since Friday. One person wrote that state police cars along with police cars from out of town communities were double parked on Broadway and Market Street in front of  Jacks that evening around 9 pm.  They wondered why there were so many police in that area and what all the commotion was about?

The Pagans were active for about 20 years in Gloucester City from the mid 1960’s up until the 1980’s.  "If you grew up in Gloucester City during that period you new at least one of the members of the motorcycle club since you went to school with the guy," said one long time Gloucesterite.  Some of those individuals, much older now, who are no longer members, still reside in town.

According to Wikipedia… the Pagan Motorcycle Club   is a one percenter 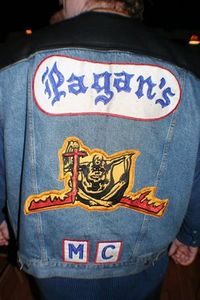 motorcycle gang and organized crime syndicate formed by Lou Dobkin (or Dobkins) in 1959 in Prince George’s County, Maryland. Known simply as The Pagans colloquially, the club rapidly expanded and by 1965, the Pagans, originally clad in blue denim jackets and riding  Triumps, began to evolve along the lines of the stereotypical one percenter motorcycle club.

Members join motorcycle gangs for a variety of reasons. First, bikers often consider themselves loners and join gangs for mutual protection. The bonds with other motorcyclists are strengthened by the subscription to non-conventional norms and the rejection of mainstream society. Secondly, they use MCs as mechanisms of power. Oftentimes, MC membership brings them legitimate and illegitimate job opportunities and financial prospects. Additionally, members feel a sense of control while intimidating less powerful, defenseless citizens. Generally, the values of this MC subculture lie in the value of brotherhood, the interest in motorcycling, and respect for mechanical skills. Although many motorcycle gang members are loners, many have families, are gainfully employed, and have much to lose despite their risk-taking.

The Pagans Motorcycle Club is categorized as an outlaw motorcycle gang by the Federal Bureau of Investigation. They are known to fight over territory with the Hells Angels   (HAMC) and other motorcycle clubs, such as Fates Assembly MC, who have since merged with the HAMC. They are active in eleven states; Delaware, Kentucky, Maryland, New Jersey, New York, North Carolina, Ohio, Pennsylvania, South Carolina, Virginia and West Virginia.

The Warlocks Motorcycle Club  is “one-percenter” motorcycle gang as  well, 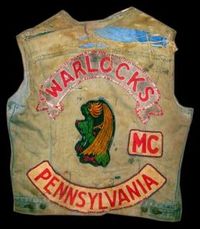 says Wikipedia. It was formed in Philadelphia PA in 1967. It was the first official outlaw motorcycle club founded in Pennsylvania and there are now chapters throughout that state as well as New Jersey, Massachusetts and Ohio areas. They bear  "colors" that are unique to the other Warlocks organizations and are the first of the known Warlocks to possess the 1%er diamond patch, worn on their "colors" over their hearts. The club's insignia is a  Harpy, a legendary winged creature in Greek mythology, and their colors are red and white. The club expanded rapidly at the end of the Vietnam War when thousands of ex-soldiers returned to the United States, many to Pennsylvania, feeling outcast from society. Members of the club must be White males.

On May 6, 1995, Franklin Township, Gloucester County, New Jersey, Police Sgt. Ippolito "Lee" Gonzalez pulled over Warlocks members Robert "Mudman" Simon and Charles Staples on a traffic stop moments after the two had committed a commercial burglary. Simon shot Gonzalez twice, in the head and neck, and Gonzalez died instantly. Simon later said he shot Sergeant Gonzalez because he did not want to return to prison. Simon was quickly apprehended, pled guilty, and was sentenced to death. In 1999, Simon was stomped to death by Ambrose Harris, another death-row inmate, in New Jersey's Trenton State Prison. Harris argued self-defense, and was acquitted.

In October 2008, PA State Attorney General Tom Corbett alleged that the Warlocks motorcycle gang are involved with a methamphetamine manufacturing operation based in Berks County Pennsylvania. The sting was dubbed "Operation Underground". Corbett said the operation manufactured and distributed $9 million worth of methamphetamine  throughout southeastern Pennsylvania and possibly (supplied) to members of the Warlocks motorcycle gang, which has been linked to organized crime and drug trafficking.

Police Chief: There Was No Fight Between Pagans and Warlocks

GLOUCESTER CITY NJ-Hearing several rumors over the past few days about a suppose brawl recently between members of the Pagans and the Warlocks motorcycle gangs in Gloucester City we asked Gloucester City Police Chief George Berglund for some answers.