PRESS RELEASE The Brooklawn Board of Education held a public hearing and then approved the district’s 2010-2011 budget of $5,177,451 at the meeting of the Board on March 30. There will be no tax increase in the district, but a few non-instructional staff reductions may be necessary, as well reductions in areas such as equipment and supplies. The district remains at the state minimum tax levy, which means that state law will not permit the Board to reduce taxes below this amount. Superintendent Dr. John... Read more → 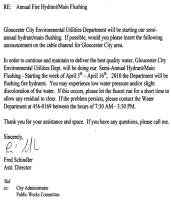 Image via Wikipedia When East Meets West Commentary by Hank F. Miller Jr. Japan is on high alert now-Code Pink I'm referring to the cherry blossom alert. The blushing blossoms carpet Japan from Southern Kyushu to Hokkaido. The cherry blossom report is broadcasts on the nightly news alongside the weather report. Cherry blossom reports are extremely accurate. When reported in Fukuoka Prefecture the blossoms would burst forth from their buds on about March 25, two days earlier than the previous year. Japanese have a special... Read more →

RELATED BILLS POINT OF VIEW Bills Tips and Snippets By Albert Countryman Jr. Publisher/Editor Gloucester City News When Governor Chris Christie announced his proposed state budget March 16, he sent shock waves that nearly swamped school districts and towns throughout the state. School district business administrators, superintendents and staff had just five days, counting the weekend, to prepare their 2010-11 budgets. They had to be submitted by the Monday, March 22, deadline to county departments of education. And, they had to prepare the budgets with... Read more →

NorthJersey.com: Police officers and their salaries "can't be sacrosanct in this process," Christie said while discussing the budget with The Record's editorial board. Other governors have tried using rebate checks and state aid hikes to offset the state's notoriously high property tax bills, which have risen to a record average of $7,281 statewide. But Christie said the 2.5 percent cap on local spending hikes that he proposed on Tuesday along with the new state budget will cut costs to achieve property tax relief. "There's no... Read more →

Delaware and Tennessee Win First Race to The Top Grants

Image via Wikipedia U.S. Secretary of Education Arne Duncan announced today that Delaware and Tennessee have won grants in the first phase of the Race to the Top competition. "We received many strong proposals from states all across America, but two applications stood out above all others: Delaware and Tennessee," Duncan said in announcing the winners. "Both states have statewide buy-in for comprehensive plans to reform their schools. They have written new laws to support their policies. And they have demonstrated the courage, capacity, and... Read more →

Regarding Comments to ClearysNoteBook (CNB)

It's great to see the discourse that occurs following our articles. Many of the comments are insightful and prompt healthy discussions which challenge our way of thinking. This is what healthy debate should do. When someone challenges our position with facts, our position is strengthened when we are forced to rethink it and defend it. But calling someone ugly names because they support a position different from yours is not healthy discourse. Neither is calling someone a liar because they hold a different point of... Read more →

| The Foundry: Conservative Policy News. If you are tired of our nation’s year-long health care debate and you were hoping that the passage of President Barack Obama’s health care bill would settle anything, then Politico has some bad news for you: the real fight is just getting started. Starting today, a coalition of leftist groups will sink millions of dollars into television advertising and astroturf events selling the plan to the American people. But as a Washington Post poll conducted after passage last week... Read more →

Cleary’s Fantasy Football Fanatic Stricken Dan Watson, Cleary’s Notebook Fantasy Football Fanatic columnist, is fighting a battle. While it has nothing to do with football it does have some things in common with that sport. One similarity is that he gets to pick his own team members—from a wonderful group of doctors that make up the Virtua-Fox Chase Cancer Center team of professionals. In addition, he picked one of the best playing fields, around. Fox Chase’ doctors and nurses know exactly what to do to... Read more →

By Albert J. Countryman Five candidates will vie for three, three-year terms on the Gloucester City Board of Education in the upcoming School Election April 20. Voters will also decide on the proposed 2010-11 school district budget. Polls will be open from 2 to 9 p.m. Incumbents W. Bruce Marks, Kimberly Waddington and Patrick R. Hagan will be challenged by Victoria Schafer and Adam Baker. Running unopposed for a two-year, unexpired term, vacated by Raymond W. Coxe, will be Linda Bittmann. The Gloucester City News... Read more →

Pet Tip of the Week 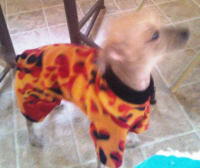 Dog-Friendly Fairs & Events Spring has sprung! Soon, you’ll be seeing posts and articles about upcoming, dog friendly events! Here are a few for you to ‘chew on’ : Camden County Animal Shelter in Blackwood: Offering their first pet festival, with vendors, guest speakers (including me, Dawn Watson), games, and lots of fun activities! The dates are May 22nd & 23rd from 12pm - 4pm. Woofstock: Usually held in August at Lion’s Lake Park in Voorhees. Sponsored by the Animal Orphanage, this event features vendors,... Read more →

Image via Wikipedia HARRISBURG - Attorney General Tom Corbett urged Pennsylvania seniors to be wary of mailings and other unsolicited offers that attempt to charge consumers a fee for information about Pennsylvania's property tax rebate program. "Pennsylvania seniors are NOT required to pay a fee to apply for the state's property tax and rent rebates program," Corbett said. "Rebate forms and instructions are available free-of-charge and can be easily obtained from the Department of Revenue, as well as Area Agency on Aging offices and the... Read more →

Everything under the sun

By Fred Durso Jr. | News | South Philly Review Ten years ago this month, the Philadelphia Industrial Development Corp., (PIDC) acquired the Navy Yard site in the hopes of ushering in a new era on such historic grounds. As the saying goes, history has a way of repeating itself. Some big-named tenants are now calling the 1,200-acre site home, and to some city officials, the news is cause for celebration — or perhaps, reason to consume a Tastykake Krimpet. The Tasty Baking Co., which... Read more →

Re: The New Permit Parking Law I live in the 200 block of Morris Street and a lot of times I have to park on King well I have a company van which isn’t register to me well the government here says they won’t give me a permit because the van isn’t mine. Now I’ve worked hard all my life as a carpet installer and one of the perks is getting a company van now because of Gloucester city government I can’t have my van.... Read more →

By Albert J. Countryman Jr., Publisher The recent rain storm that dropped three plus inches on the South Jersey area flooded sections of Water Street and Jersey Avenue in Gloucester City. This has been an ongoing problem for decades. These streets should not be that flooded. All the water created problems for any residents who had errands to run. Also, with this much water, the chances of the rainwater mixing with the sewer water, and then going directly into the Delaware River, are much greater.... Read more → 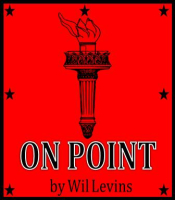 Do not misinterpret my following column's intent as this is not a condemnation of one single Party. It is instead an indictment upon every politician, Republican and Democrat, who sees bureaucracy as a means to suppress the rights of the people to the will of the government, all behind the guise of the “greater good”. This is a fight between those who side with powerful state control (Statist) and those who believe in Liberty, Individual Rights and the Freedom of choices (Pro-Liberty). “Towards the preservation... Read more →

When Jonas Cattell ran the nearly ten miles from Haddonfield, New Jersey to Fort Mercer at Red Bank (National Park New Jersey) he wasn’t thinking about the scenery, he didn’t worry about his mile splits or even how he would get back to his blacksmith apprentice job in Haddonfield. Jonas was thinking about life and death. Jonas was 18 on October 22, 1777, he was half Lenapi Indian and he loved to run. When he wasn’t working for blacksmith John Middleton as an apprentice in... Read more →

ATLANTA - The Women’s Basketball Coaches Association (WBCA), in cooperation with State Farm, announced the finalists for the 2010 State Farm Coaches’ All-America Team for the National Collegiate Athletic Association (NCAA) Division I. The 40 finalists, who are voted upon by WBCA-member coaches in each of the eight WBCA geographical regions, are now in the running for selection to the 10-member State Farm Coaches’ All-America Team. The finalists are: Name Institution Year Pos. Height Danielle Adams Texas A&M University Jr. C 6’1 Kachine Alexander University... Read more →

March 23, 2010 HARRISBURG - Attorney General Tom Corbett today joined attorneys general from 12 other states in filing a lawsuit challenging the constitutionality of the health care reform legislation, signed into law by President Obama. Corbett said the health care law imposes an unconstitutional mandate requiring citizens to purchase health insurance. "Congress does not have the constitutional authority to enact this requirement," Corbett said. "This law threatens every citizen's individual liberties." Through this law, the federal government asserts its power to regulate interstate commerce,... Read more →

City of Gloucester City: Endorsing the UEZ Funds to be Restored

City of Gloucester City: Reclassification of $110,723 Expenditures from Federal and State Grant Funds

City of Gloucester City: Accepting a $7000 Grant from NJDEP for Trees

City of Gloucester City: Resolution Reducing Salary and Opt Out Benefits by 20% 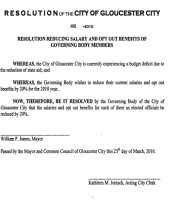 NOTE: From Councilman Dan Spencer, March 22, 2010 Bill, I believe in a recent article, you said it costs @$80,000 for benefits and/or Opt Out for the 7 members of the Governing Body. At this point in time, I do not know the exact figure, but what I do know is that I DO NOT take the City benefits nor do I receive Opt Out in lieu of the benefits. Also, at the recent Caucus meeting, the Mayor proposed we take a 20% reduction in... Read more →

The above resolution was introduced for passage at the March 25th, 2010 council meeting Read more → 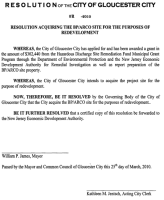 Officer.com Breaking News E-Alert Thursday, March 25, 2010 Officer.com News A rookie St. Louis officer was killed yesterday morning in a four-vehicle crash while in pursuit of a burglary suspect, according to The St. Louis Post-Dispatch. Officer David Haynes, 27, spotted the suspect's car and pursued with his lights and sirens on before his cruiser was struck from both sides at the intersection of Kingshighway and Oleatha Avenue. The suspect is still at large, described as a medium-build black male with a "chin beard" and... Read more →