BILL’S POINT OF VIEW: LOOK WHAT I FOUND! 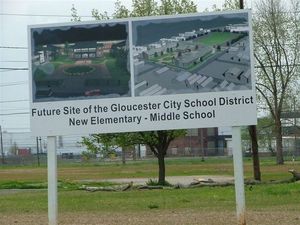 Looking through that 100 page document I found it astonishing how close the author came to predicting the decline in student enrollment over a 10 year period beginning in 1978 and ending in 1988. In 1978 the total enrollment was 2493 and it was predicted that figure would decrease to 1854 by the year 1988.

Incidentally in the past enrollment figures were released monthly to the public by the Gloucester City School Superintendent/Board of Education. That practice is no longer the norm.

In light of the declining enrollments and the rated condition of the elementary schools in Gloucester City, it is recommended that the following sequence of events be instituted:

2. The Gloucester Heights School be converted to office and support staff use with 4 classrooms retained for school use as well. Estimated cost $200,000 Completion by January 1982

4. Broadway School be abandoned for public school purposes and donated to the municipality for community use or sold by September 1982.

5. Brown Street School be abandoned for educational purposes and donated to the municipality for community use or sold by September 1983.

A preliminary estimate for both schools total $2.3 million, but closer architectural studies are required to refine these figures. The total cost for the district would then be about $3 million.

The District will retain considerable flexibility in its use of the remaining facilities while lowering costs by having two less buildings to operate and maintain. In addition certain options will remain open to the District. If pupil population declines further, all or some of the classes can be closed in Gloucester Heights. If pupil population increases unexpectedly, all of Gloucester Heights can be retained for educational purposes, and the offices move to Brown Street School instead.

Move forward to the1990’s Gloucester City applies for the ABBOTT label. There is much celebration among local politicians, school board members and some residents as 350 apartments are demolished to make way for the Cold Springs School. The price tag for the K-3 building nearly $20 million. A few years later more millions are used to build a preschool next to Cold Springs as it is mandated by the state.

Asked who is picking up the tab and in chorus our leaders tell us, “It’s the state, not going to cost local taxpayers a cent more in taxes.” No one gives any thought to the fact that you and everyone else that lives in Gloucester City are the state. And it is still your money that is paying for this school and others that are being built in 30 ABBOTT Districts across New Jersey.

Jump ahead 30 years Gloucester City still has its hands out waiting for the state to fund yet another school. Seventy homes and one business were demolished to make room for this school. The land has set vacant for the last six years.

As for the cost for the new middle school, it depends on who is doing the talking as it ranges from $60 million to $66 million. Again our elected officials tell us, “Don’t worry, the state is picking up the cost for this school too. It won’t cost us a cent. We are entitled, Gloucester City is a poor community.”

Because the City’s middle school (4th through 8th) enrollment figures are low, approximately 580 students, there is speculation that the state will force the closure of the Alice Costello School in Brooklawn to increase that number. The Brooklawn School Board has voiced opposition to that plan.

New Jersey is facing bankruptcy according to state politicians. February 11 the newly elected Governor, Chris Christie declared a state of emergency laying the groundwork to make a range of cuts that included $475 million in state aid being withheld from more than 500 school districts. The state will withhold $686,805 from the Gloucester City School District. Christie said the state budget has a $2.2 billion shortfall created by falling revenue and increased costs for various programs. That figure fluctuates depending on who you talk with in Trenton. But all will agree New Jersey is facing bankruptcy if cut backs are not made soon.

As for the future of the proposed middle school Mayor Bill James said last Friday, “I have reached out and spoke with the Regional Director of Intergovernmental Services for the Governor’s Office and questioned Peter Sheridan Jr. as to the impact that the Governors Budget Plan would have upon the responsibilities of the School Development Authority (SDA). Mr. Sheridan advised that this item would be separate from the announced mandatory School Aid cuts and required surplus usage, but that he would have to conduct some research and get back to me with an answer as it relates to the future plans of our New Middle School Construction.”

Posted by CNBNewsnet on Monday, February 22, 2010 at 08:35 AM in CNBNEWS.NET Point of View, CNBNews.net TIPS AND SNIPPETS, Gloucester City NEWS | Permalink | Comments (15)

BILL’S POINT OF VIEW: LOOK WHAT I FOUND!

Looking through that 100 page document I found it astonishing how close the author came to predicting the decline in student enrollment over a 10 year period beginning in 1978 and ending in 1988. In 1978 the total enrollment was 2493 and it was predicted that figure would decrease to 1854 by the year 1988.